A VR-Capable Laptop, Liquid Cooled 2-in-1, & All the Coolest Tech Announced at Acer’s Event (Video)

You are here: News » A VR-Capable Laptop, Liquid Cooled 2-in-1, & All the Coolest Tech Announced at Acer’s Event (Video)

Acer held an event in the 57th floor of the world trade center building to show the press what it is they’ve been up to for the past few months, and, well, it seems like a lot.

From a fanless 2-in-1 to a VR-capable gaming laptop, here’s the coolest things they announced. 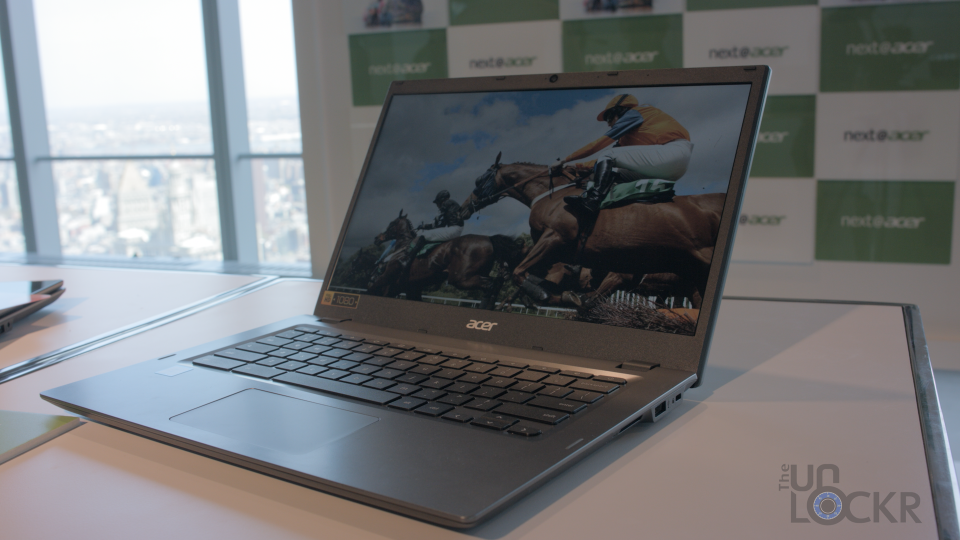 First up, Acer announced a pretty slick looking Chromebook that they are calling the fastest on the market. The Chromebook 14 for Work as they are calling it (because it meets Google Chrome for Work initiative that means that has specific durability and security benchmarks) has the option of 6th Gen Intel Core i processors instead of some of the smaller M series ones we usually see in Chromebooks.

It is also US Military certified, meaning that it has been tested in rain, dust, sand, high and low temperatures and dropped a bunch of times and was able to continue working.

On top of that it has a unique scratch resistant Gorilla Glass top that looks kinda slick and Acer says business customers can customize by putting an image on (i.e. their logo or something else business-y).

All in all, it’s a pretty decent Chromebook for those that need one for work. 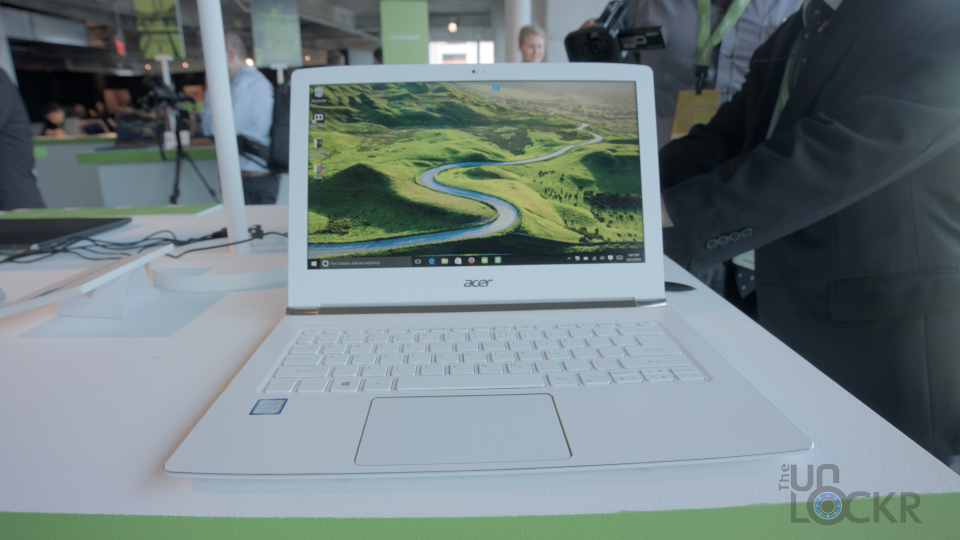 The Aspire S 13 is the latest addition to the ultra-slim S series of notebooks from Acer.

With its textured matte top, shiny hinge, backlit keyboard, and sheer thinness, it actually looks pretty slick. Underneath that exterior we have a 6th Gen Intel Core i processors, 8GBs of RAM, a full HD IPS display, and an optional battery that Acer says will last up to 14 hours.

It’s available with a touchscreen or not and measures 0.57 inches thin with weighs 2.86 pounds, making it not the lightest but still pretty light. 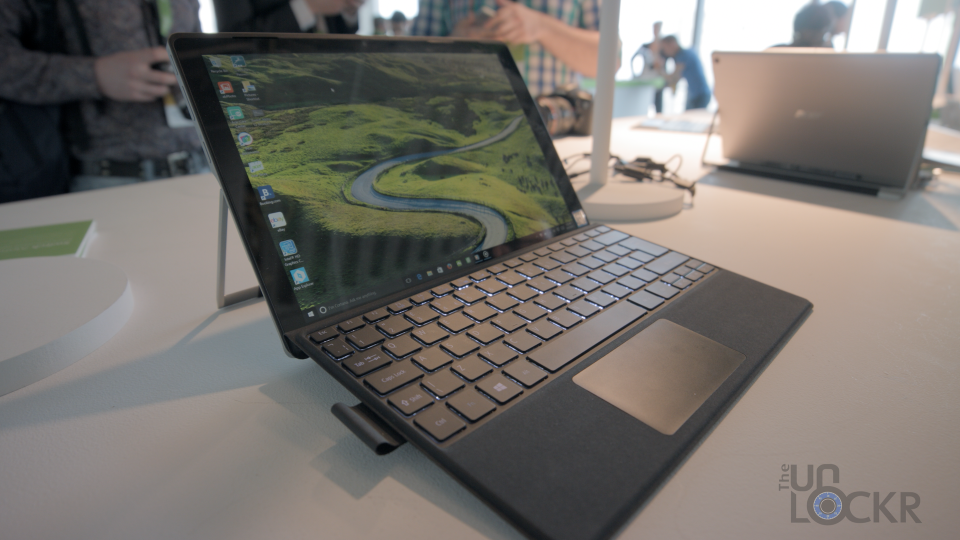 Next up, Acer announced a 2-in-1 that has a pretty unique cooling system.

The Acer Switch Alpha 12 is a fanless, liquid-cooled touchscreen tablet with detachable keyboard. The real interesting thing about this method of cooling is how they managed to do it without adding any pumps to move the liquid around. Instead, Acer has a neat system that simply uses the heat created by the device, and the handy principle of thermodynamics, to move the liquid around the device. As it heats up, it moves away from the heat (carrying the heat with it) then cools down and returns in a clever energy-less system. Benefit of all this? Proper cooling, and no sound.

In addition to this clever cooling, the specs aren’t too shabby either.

6th Gen Intel Core i processors like the other devices in this announcement really, the option of 4GBs or 8GBs of RAM, a multi-position kickstand, detachable keyboard that is included with the purchase, and a 12″ 2160×1440 resolution touchscreen that you can use their Pen and the new Windows Ink coming out soon with (keyboard comes with, pen not so much).

All of this is encased in an anodized aluminum chassis with a USB 3.1 Type-C port and another USB port as well as a MicroSD card slot. Starting price is $599. 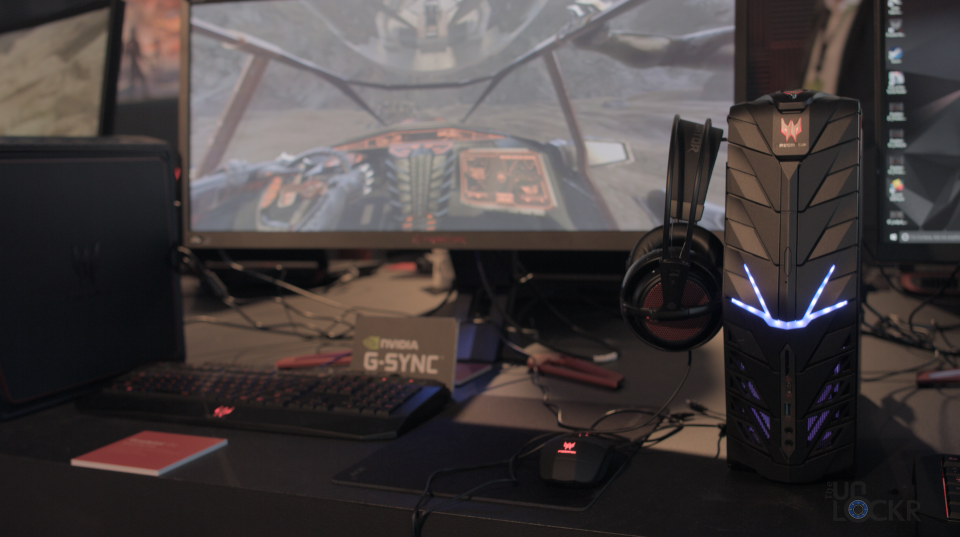 For those into series gaming, Acer has two pretty serious contenders. The first is the Predator G1, their super compact gaming PC.

The G1 was created with LAN parties in mind (even the teaser video has the kid carrying around this desktop computer under his arm). Regardless of how many of us actually need that portability it still is pretty slick to have such a powerful PC in such a small form-factor.

The G1 has a choice of the 6th Gen Intel Core processors and up to 64GBs of DDR4 RAM. On top of that it has supports a full size NVIDIA GeForce GTX graphics card, up to a Titan X (one of their top of the line cards) so 4K gaming and even hardware intense VR are no problem for it. It even has options for a 4TB hard drive or a 512GB solid state drive with a USB 3.1 Type-C Gen 2 port for extra data transfer options.

And to further the idea of you bringing this to LAN parties, Acer has a promotion of a free matching rolly-bag for the first customers to buy it. 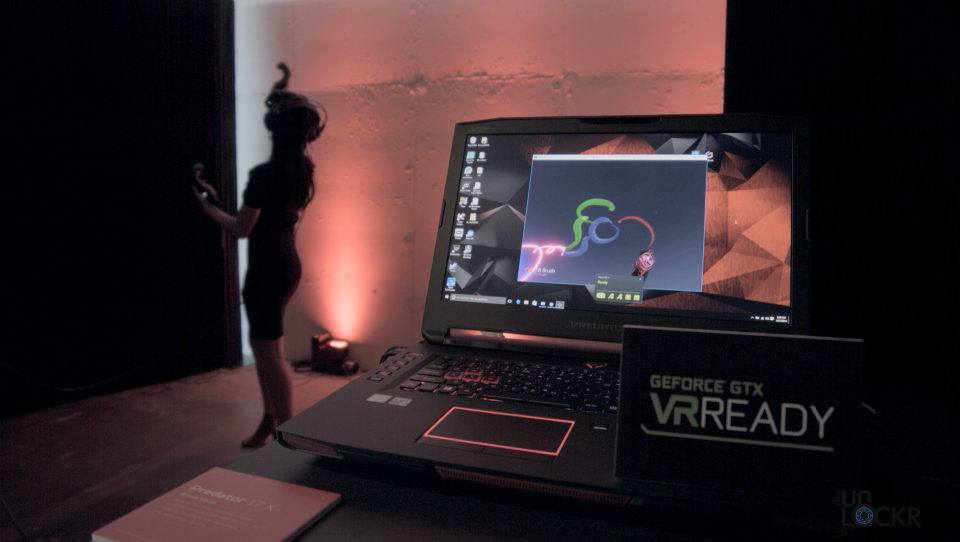 And finally, we have the thing I was most excited about –the Predator 17X aka a serious gaming (video editing?) laptop.

Powered by a 6th Gen Intel Core i7 processor with overclocking available up to 4.0Ghz, up to 64GBs of DDR4 RAM, and a full-size NVIDIA GeForce GTX 980 graphics card (not the smaller M variety, but the full desktop version), it’s a serious laptop that can not only handle 4K gaming, but VR as well. Think about that for a sec. That translates to a portable VR experience.

Acer also designed a new fan system to help cool all of this power with an air intake at the front of the laptop instead of the usual under the laptop and an exhaust vent on the back that works a lot like the air intake of your car.

Add to that a colored backlit keyboard, Thunderbolt 3, USB 3.0 ports, an SD card slot, an ethernet port and wifi that can work simultaneously, the option of a 4K display and you can see how this shapes up to be one of the top of the line laptops you can get.

The downside? Battery life isn’t supposedly great, it’s huge and it starts at $2799. But, did I mention, portable VR?

There you go, a quick recap of everything announced at the Acer event today. I’m particularly interested in the Predator 17X as a way to carry around an HTC Vive to force passerbyers to experience it on the fly. What about you guys? Anything in this line up of particular interest to you?

1 thought on “A VR-Capable Laptop, Liquid Cooled 2-in-1, & All the Coolest Tech Announced at Acer’s Event (Video)”