You are here: How To's » Smart Home » How to Make Your Home a Smart Home

If you’ve ever wondered how to make your home a smart home? Or maybe wondered what a smart home was in the first place? This video can help.

It’s the new year and my sister and her fiance just bought their first house. A fixer-upper in the town of Poughkeepsie (about 2 hours north of NYC). So I figured, while they’re fixing the baseboards and taking care of the mouse situation, I’d come in and make it a smart home.

What is a smart home?

The definition of a smart home is essentially having home appliances, lighting, heating etc. All able to be controlled via an app, computer, or voice assistant. 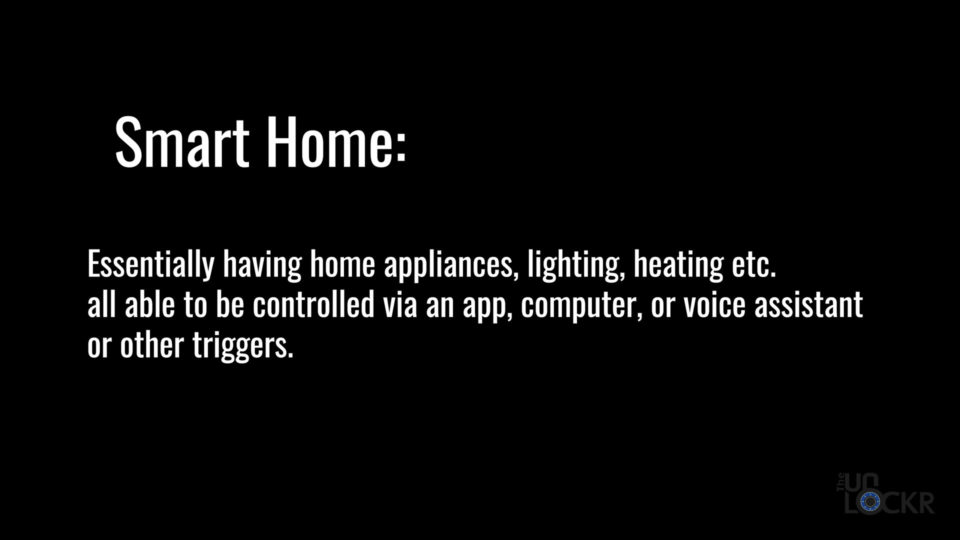 And while, we’ve been hearing a bunch about IoT (the internet of things which is precisely what is enabling smart homes to be smart and is the ability for devices to all be connected to the internet in some way), we’re finally getting to a tipping point where it’s becoming a lot more mainstream.

Now, to make a smart home, there are a few things you need. 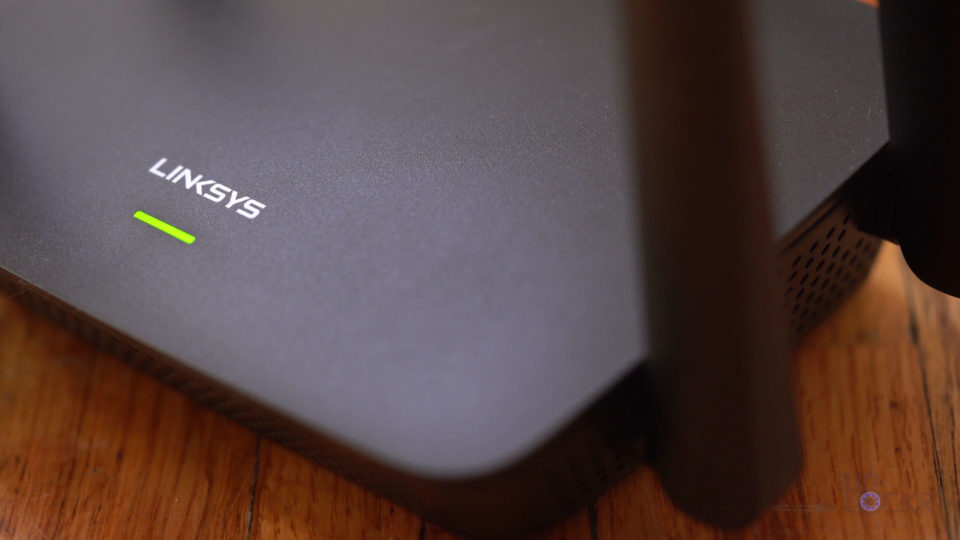 So this is probably a given, but we need internet access and WiFi. Which, chances are you pretty good that if you’re watching this video, you already have.

Next, you don’t necessarily need it but it opens up a lot more possibilities, and that’s a smart hub of some sort. This hub allows for you to use things that don’t connect to wifi necessarily and instead use a different set of standards to communicate with the other tech in your place (standards like ZigBee and Z-Wave, for example). Now, we don’t need to get into what those are right now, but they are essentially radio standards that use very little energy so they’re generally used instead of Bluetooth and WiFi for smaller things like smart light bulbs, some appliances, and a ton of different sensor types (which we’ll get to in a sec). 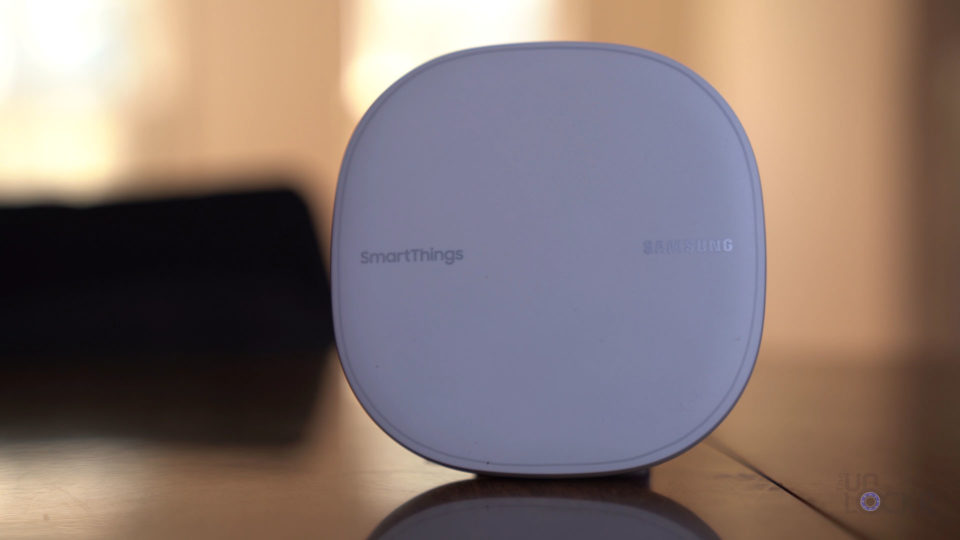 So probably the most popular smart hub and ecosystem of smart devices that work with that hub is called SmartThings. SmartThings is a company that was actually bought not too long ago by Samsung and because of that has since been expanded to a huge ecosystem of their products from door sensors, to outlets, to security systems, to even washing machines, fridges, etc.
Personally, the popularity helps and the sheer number of different products they have that all just work well not just with each other but a lot of other services and devices, but also the UI is great, it’s super intuitive, etc. 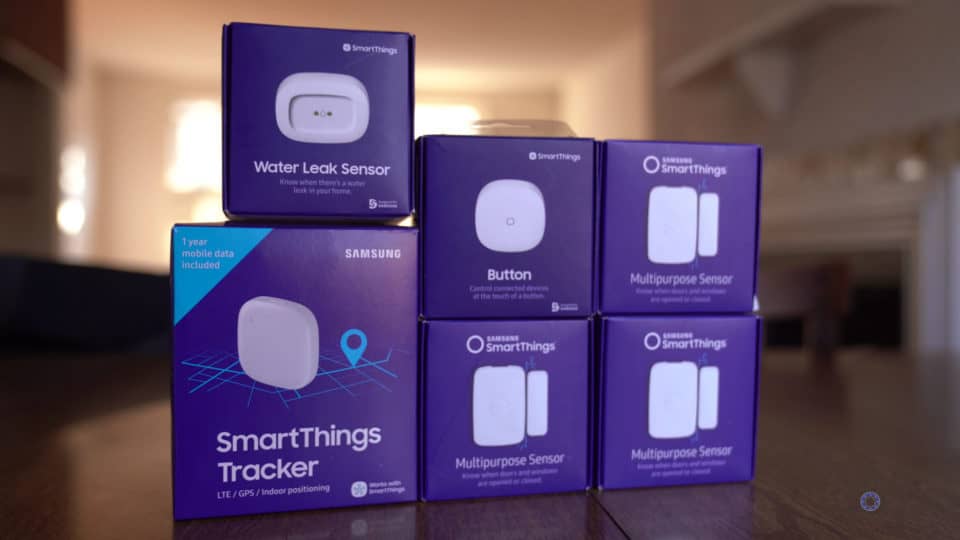 Now, I recently did a video on Mesh Wifi and showed my favorite Mesh Wifi Hub there which happens to be the SmartThings WiFi. Now, you can check out that video for more info on what mesh wifi is, but the reason I’m going to use it here is because they have a 3 story place and it’ll easily cover all of that in signal, but it also has a SmartThings hub built in which saves us from having to get that hub separately. 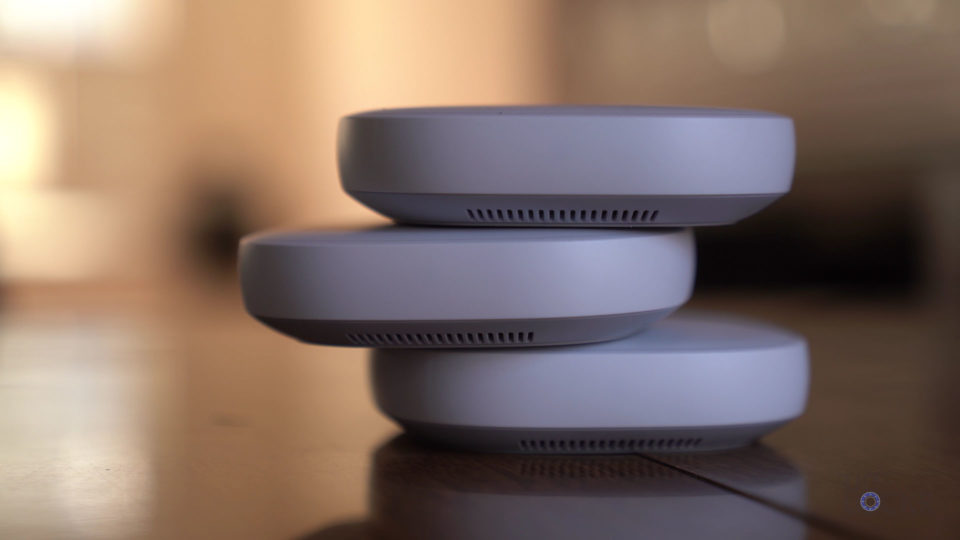 You can either use the SmartThings WiFi or use your existing Wifi and just get a SmartThings hub that just plugs into the router via ethernet and you’re good to go (links to everything I use in this video will be below by the way if you’re curious).

So, now that we have Wifi and an IoT hub (in this case, the SmartThings that’s built into the wifi routers), we can now get to the fun stuff.

Let’s start with sensors. So, again, SmartThings has a ton of sensors and, while you can trigger actions without them using Alexa, for example (which we’ll get to more in a sec), it’s the sensors that allow you to really automate things in your home. 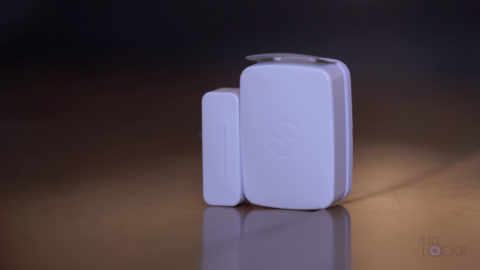 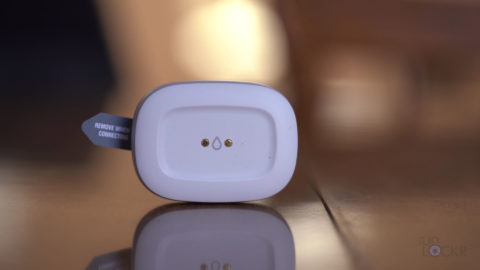 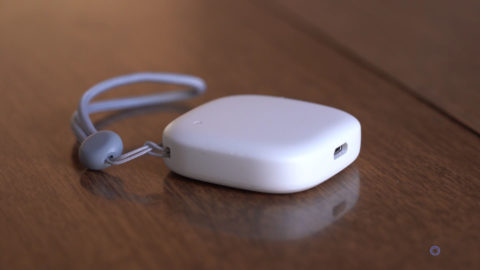 So, I got them a bunch of multi-purpose sensors, which can be used for things like doors and windows to determine when they are open and shut, for example. We have a water leak sensor, that can detect moisture that I’m going to put in their basement next to their water heater so if there’s ever a leak it’ll detect it. We have this tracker that uses GPS and LTE to tell you where it is at all times, so I put it on the dog, Winston, so we can keep track of him and have it notify us if he leaves a designated area, say the house.

And, again, there are a ton more you can choose from and get creative with how you’ll use them. 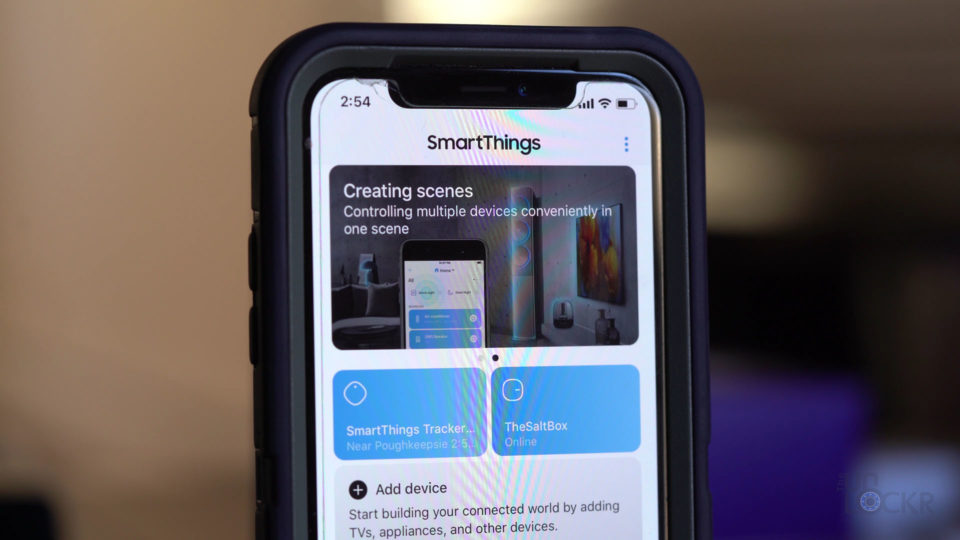 So once we have those setup, we can set them up in the app (SmartThings usually just detects new devices within range automatically, but you can also search for them) and once set up, we can then create sequences for them. So if the door opens, do something, if water is detected in the basement, do something else, etc.

But, what do we want them to do? Well, just with this setup, we could easily have the water leak sensor send a notification to our phone that water has been detected. But let’s add some more stuff so we can do even more. 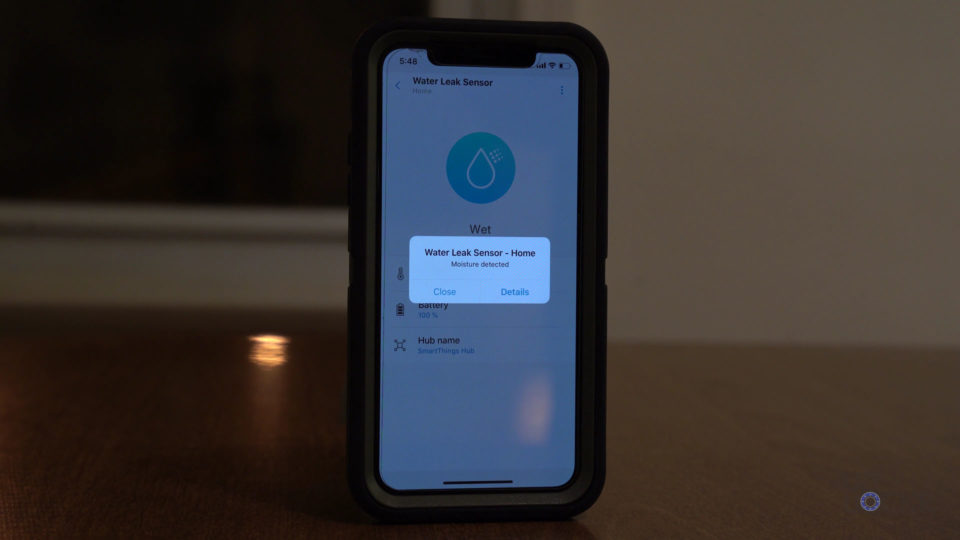 Now, in addition, to these sensors that we can use to automatically trigger things, probably the most popular way to trigger things right now is using a voice assistant. The two most popular are easily Google Home and Amazon Alexa. 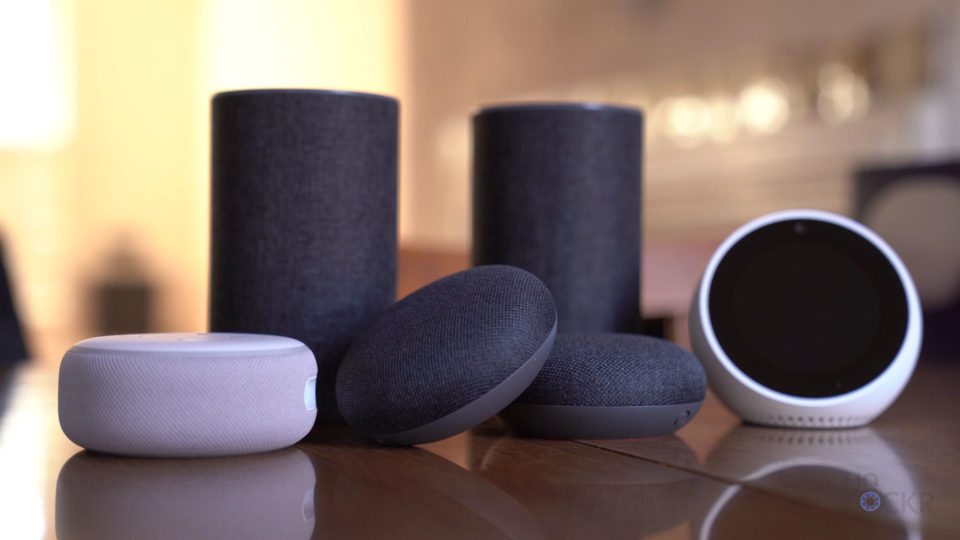 You can get either of these assistants in a crazy amount of different forms now. From, these small pucks that both offer (called Google Home Minis for Google Assistant or Amazon Echo Dots for Amazon Alexa) for under $30. To more advanced versions, like the Google Home Hub which has a screen and more powerful speakers, or the Amazon Echo Show for a similar concept as well as this which I think is a great middle ground, the Amazon Echo Spot. Which can use the screen as a clock when not in use, but then we can use the screen to show the weather, and cameras around the house, etc. 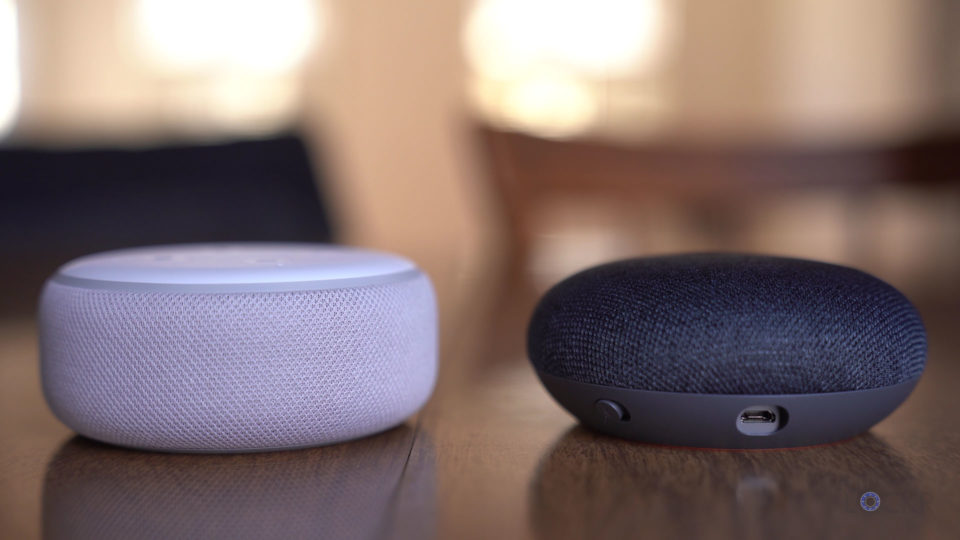 The voice assistants are great in that you can talk to them to trigger things on the device themselves (i.e. “Alexa, play music), but you can also have them triggered to do things based on those sensors (i.e. when the door opens, play the Imperial March song).

Now, so we’ve discussed things that can trigger other actions for the most part. But now, let’s get some things in here that those triggers can control. 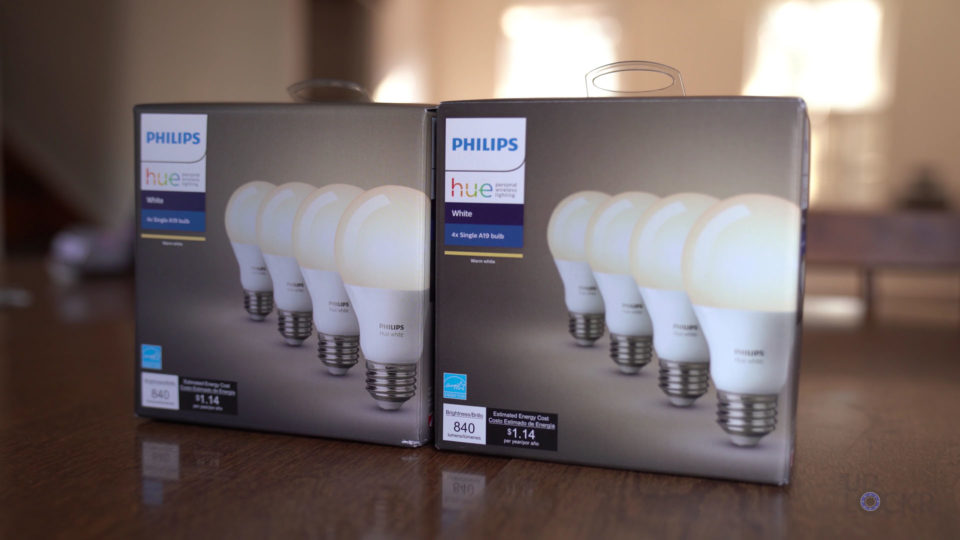 First up, the thing I think most people go for originally when setting up a smart home, lights.

Philips Hue is probably the most popular brand for smart bulbs out so I’ll use those for this. Basically, though, they require their own hub which you can get with a starter kit that comes with a couple of bulbs, too. You plug this in via ethernet to your router, open the Philips Hue app on your phone and follow the quick steps to set it up. 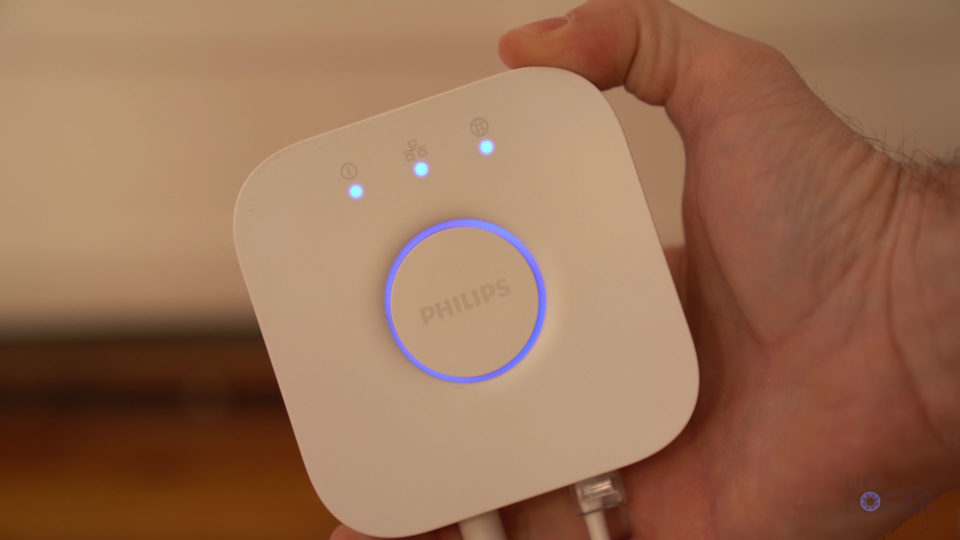 After that, you’ll put the lights around your house replacing the other bulbs you normally have and then we can go back to the Philips Hue app and group them into rooms. So say all lights in the living room we put in a group called “living room”. These groups are all work with SmartThings, Alexa, and Google, etc. and so once that’s done, you can now tell Alexa, to turn off the Living Room Lights, or set up a procedure in the SmartThings app that when the door opens, turn on the lights, etc. 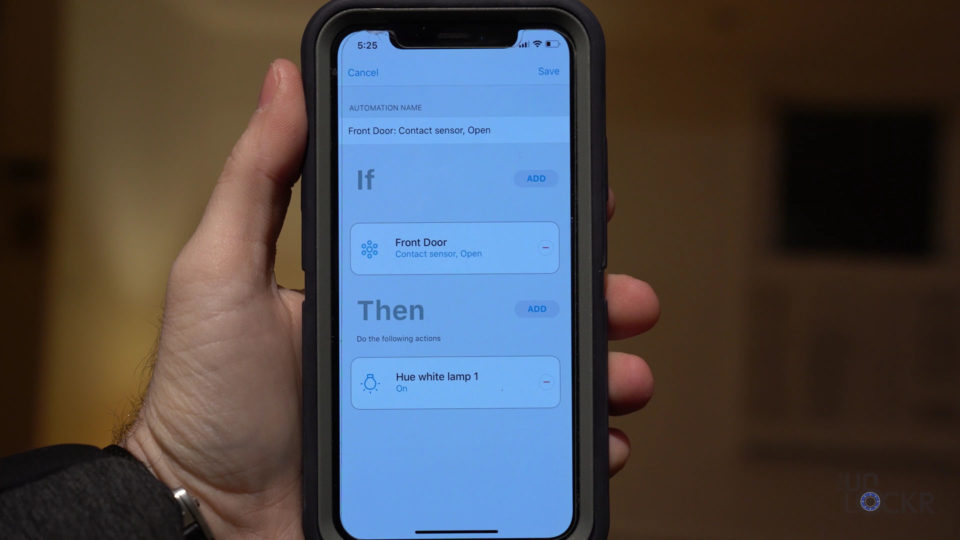 Next, I’m going to set them up with a Ring doorbell. This doorbell connects to the normal wiring that the original doorbell connected to (and has super easy instructions, promise it’s not as hard as it sounds) and once installed, now we have a trigger (people ringing the doorbell, movement is detected by the camera, etc.) but also, we can say, Ask Alexa on the Echo Dot because it has a screen or even our Alexa app on our phone, to show us the front door and it’ll bring up the camera feed. 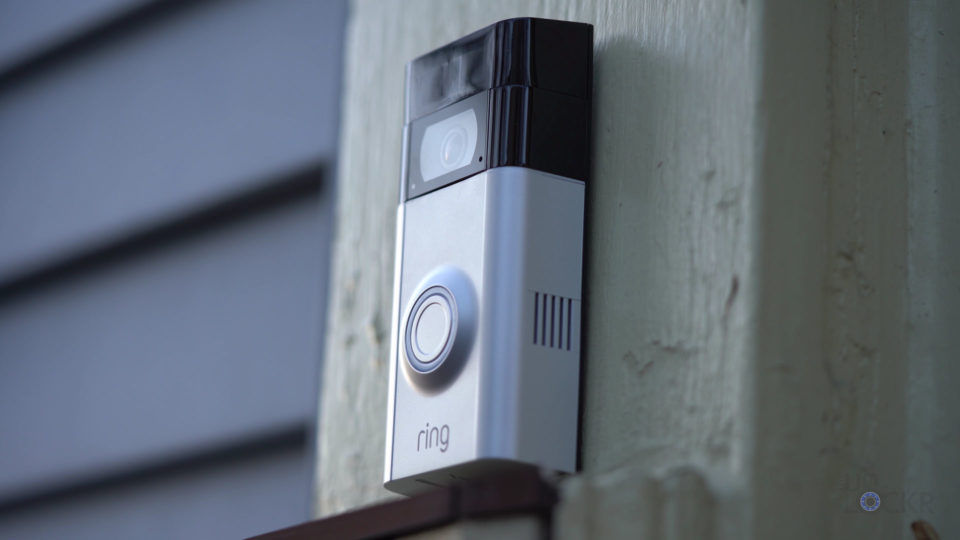 OK, so now, let’s add some smart outlets. This is a quick way to control other things in the house that we can say leave on and then use the outlet to turn on and off. So a fun one is the coffee machine. You can put your coffee in it the night before, turn it on and plug it into the smart outlet, but then turn off the outlet via the SmartThings app and give it a name like Coffee Machine. 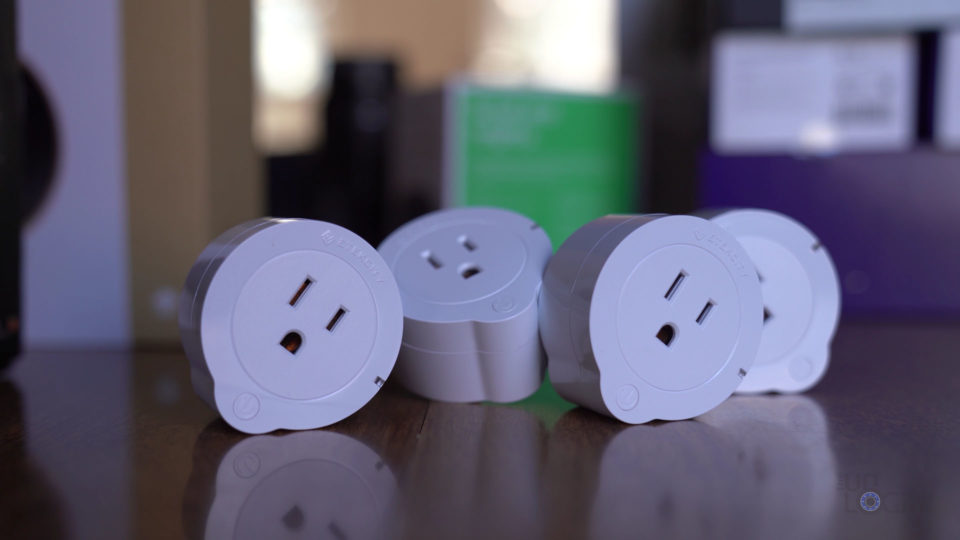 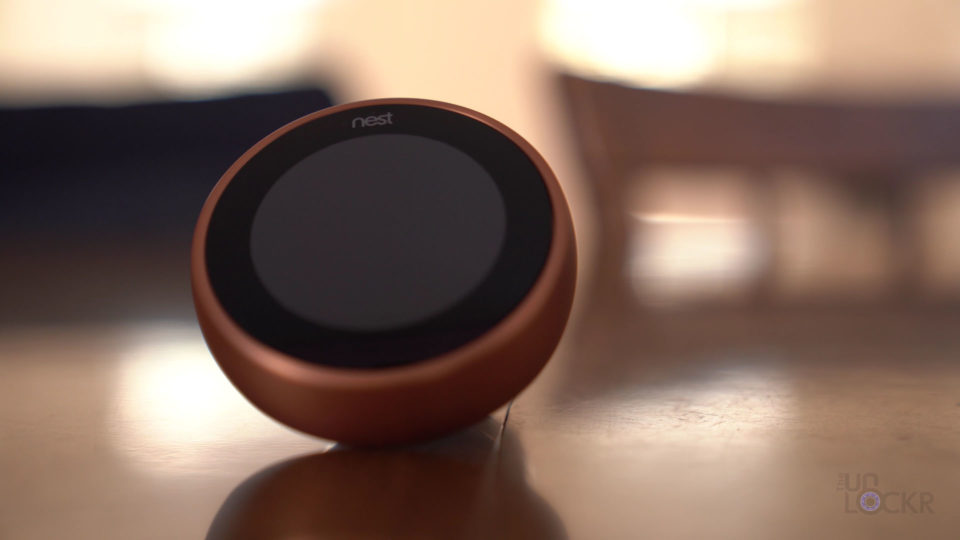 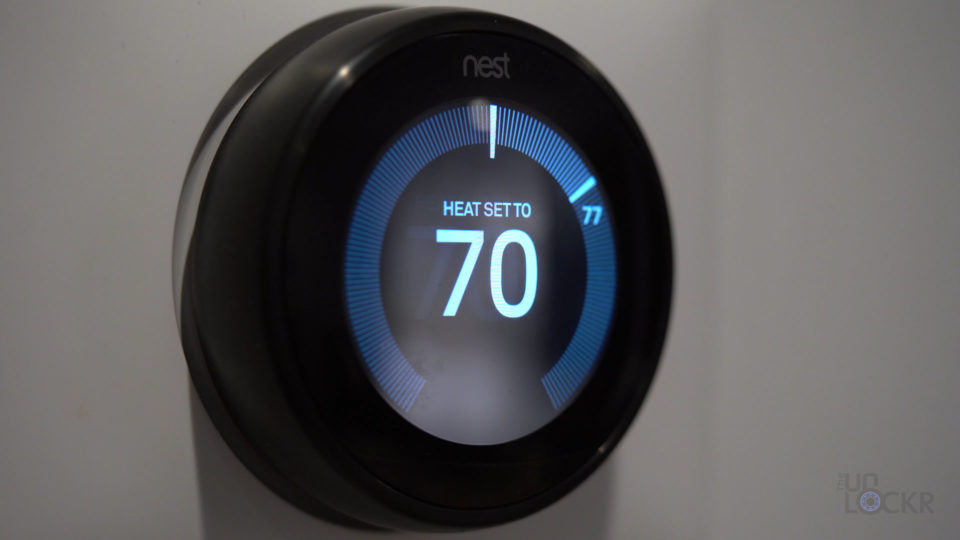 So another thing I want to add to their new home is something I think is actually super valuable right off the bat and that’s a smart thermostat. Using this Nest thermostat (which just goes and connects to the existing wiring for the current thermostat like the doorbell did for the doorbell (and again isn’t as hard as it sounds), we can now not only control the temperature by telling Google or Alexa to set it to 75 degrees. You can also have it use your phone to determine your location if you want and when you leave automatically set the temperature to one that uses less power, which will end up saving you money. ConEd my electricity company even does a thing called Rush Hour that, if you opt-in, let’s them turn down your thermostat in times where a lot of other people are consuming more power in exchange for giving you a refund on your electric bill. 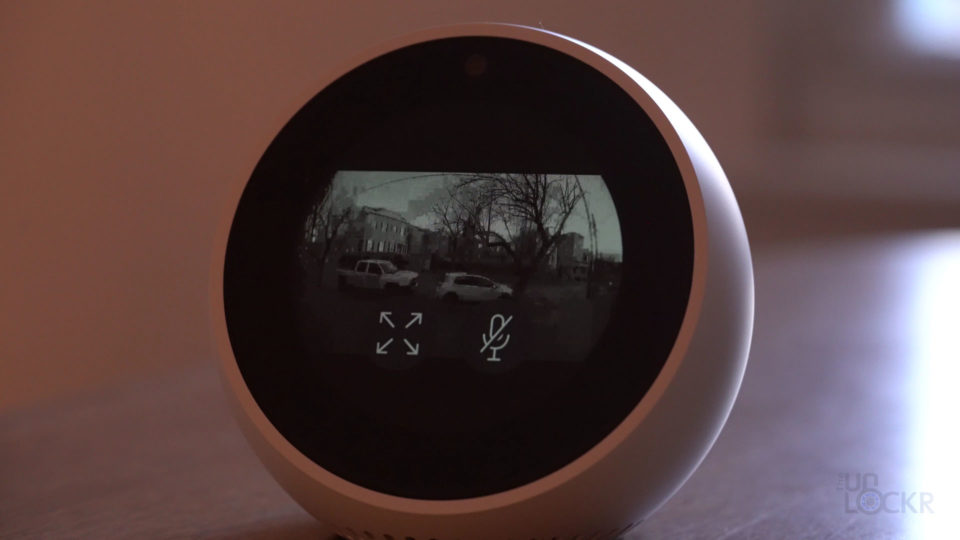 By the way, we also have a SmartThings button, that we can put anywhere and push it to then turn on lights, or control anything else in the house for those that may still want some sort of tactile thing to trigger actions. 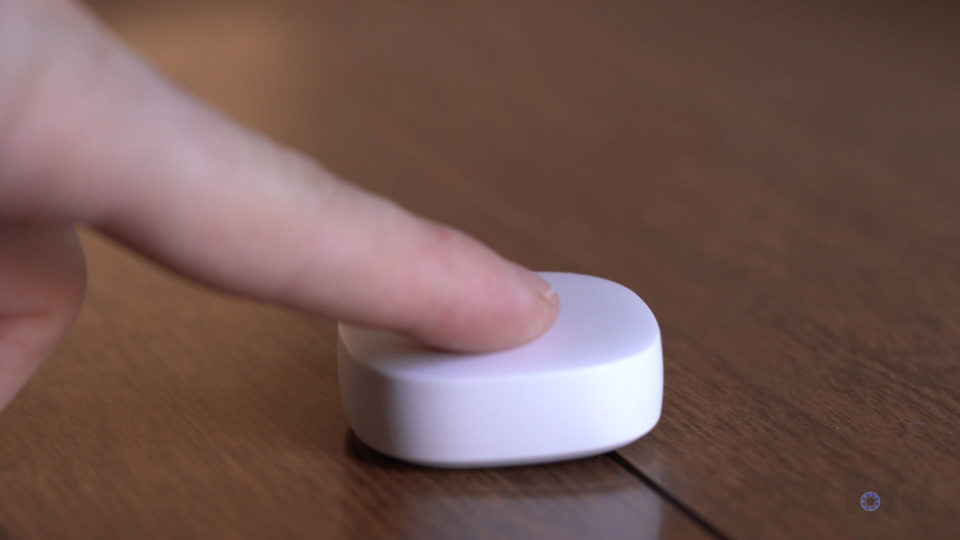 Now, this is just a few examples of how to make your home a smart home, but I think this starts to give you a good example of just how many possibilities there are with this stuff. You can even use apps like IFTTT and connect your SmartThings account, Alexa, etc. and create super clever automations with a ton of other services (or see what super clever home automations others have come up with). It really is endless. And soon we’ll have things like smart ovens that will be able to weigh the food you put in and use computer vision to determine that it’s a turkey and just cook it perfectly for you. Or your smart fridge can track the items in it, get a recipe downloaded from online, tell you what you need on your shopping list that week, then preheat that oven, and walk you through the whole thing via the Alexa Spot. Yeah, soon, we will be living in the Jetsons.

Hope that was helpful guys! Let me know in the comments below!