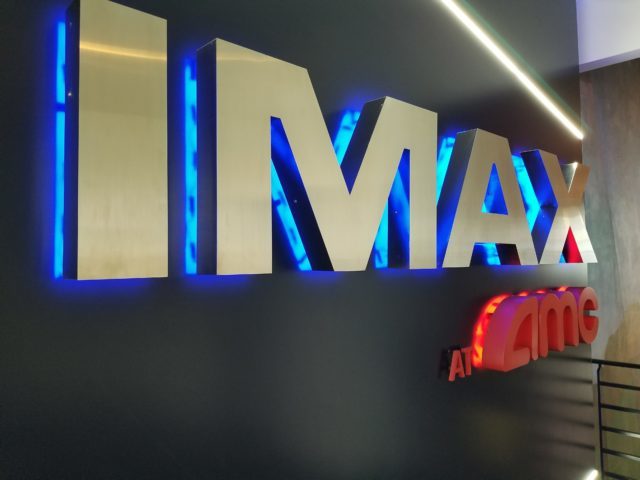 Well, once you realize that Acer is one of the strategic partners in IMAX’s new 50 million dollar investment fund for higher quality VR content that happened late last year, you can start to see the conversation: “Hey, why not do your event at our theater this year? We have the world’s largest IMAX screen there. Wouldn’t that be awesome?” So, here we are. 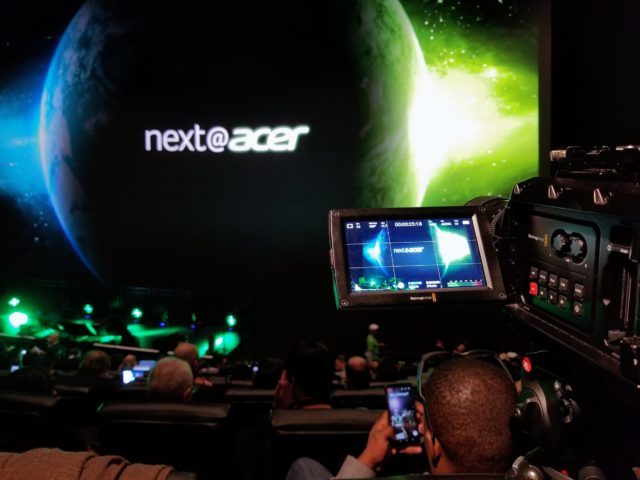 Regardless, of the venue, there were a ton of products announced as is the norm for Acer each year. Let’s go through some of the more interesting ones (and you can check out the full list in the press release and tech spec sheet at the bottom, if you want).

First up, the super interesting (and hardest to get near during the demos) Acer Predator Triton 700. 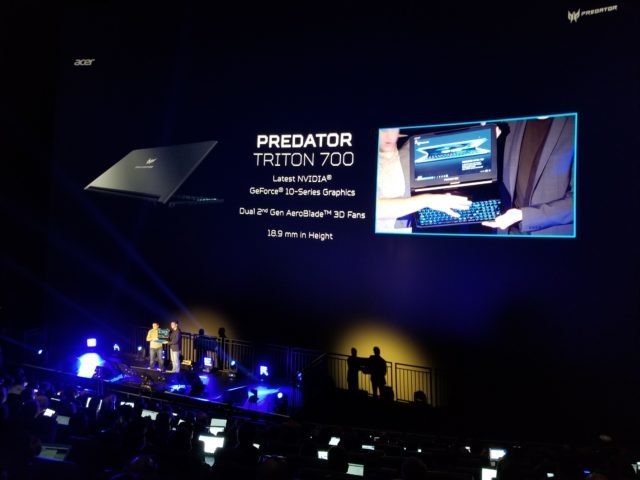 With the likes of Razer and other companies coming out with smaller and smaller laptops with more and more powerful GPUs and processors, Acer decided they needed to step up their game. 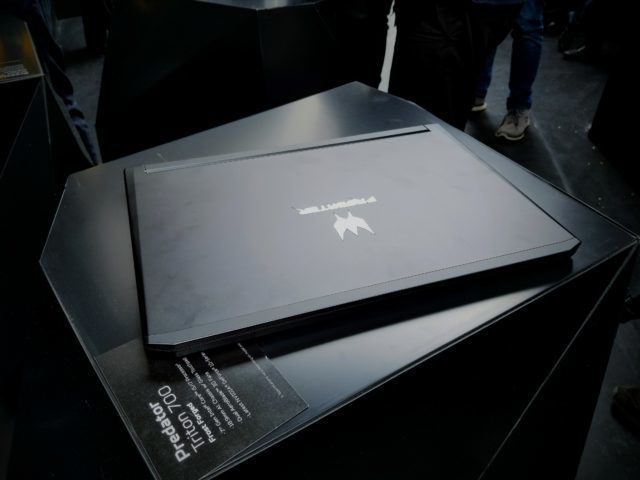 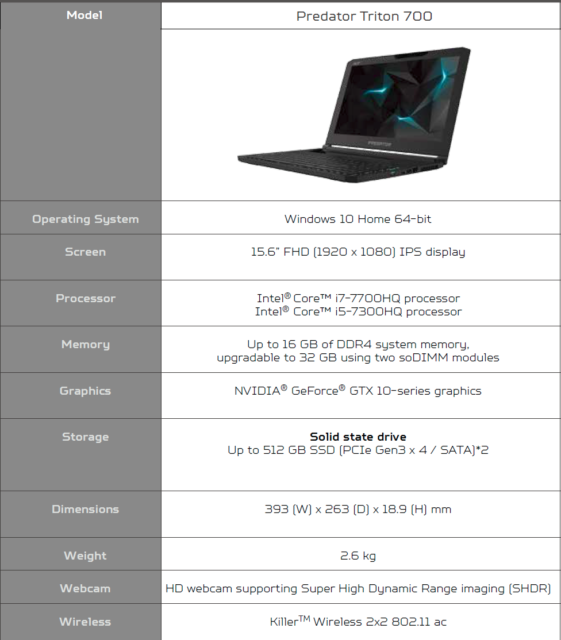 They also even mention that you, yourself, can upgrade the RAM to 32GBs should you want (if I’m reading that spec sheet right), which I think is a nice gesture considering most gamers are definitely comfortable swapping out a couple of sticks of RAM.

Acer also posted benchmarks of the new device for 3DMark and, depending on the price and configuration of the tested laptop, they’re pretty impressive: 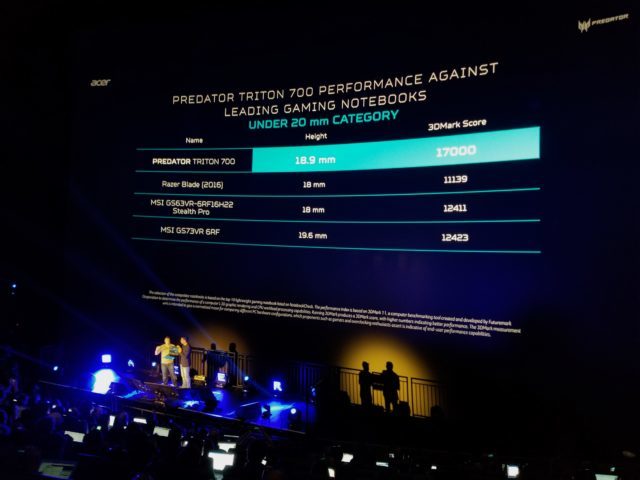 If you look closely at the photos of the laptop though, you’ll notice something odd. First thing I said to my buddy sitting next to me when it came on stage was, “Where’s the trackpad?” 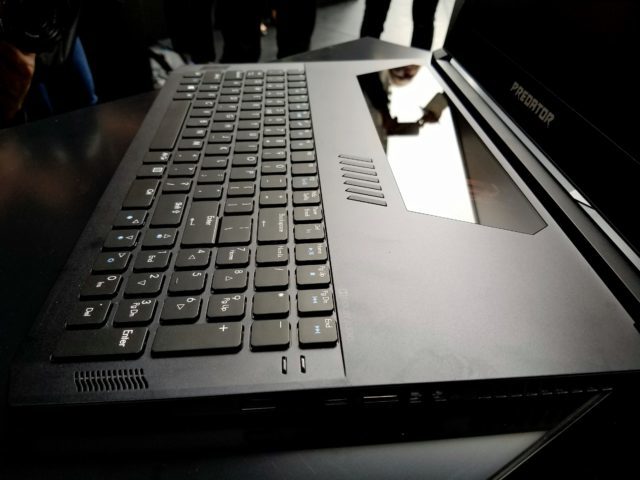 Turns out the trackpad is that piece of glass above the keyboard. Yeah, I’m not sure how I feel about that either, but I’ll hold judgement until I get to try one. 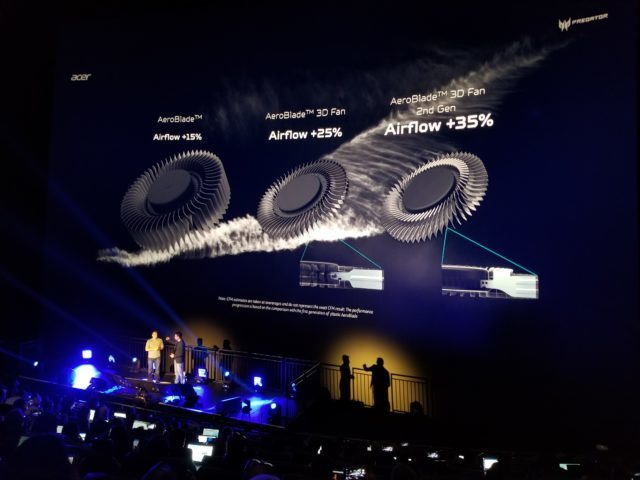 Part of the reasoning for this is that Acer patented a new cooling fan called the AeroBlade 3D 2nd gen. The new metal fan with a small fin added to each blade actually cools the computer 35% more than the previous model fan and is, once again, a testament to Acer’s commitment to proprietary cooling technology.

Pricing for the laptop starts at $2,999 and will be available in August.

Next up, we have the Acer Predator Helios 300. 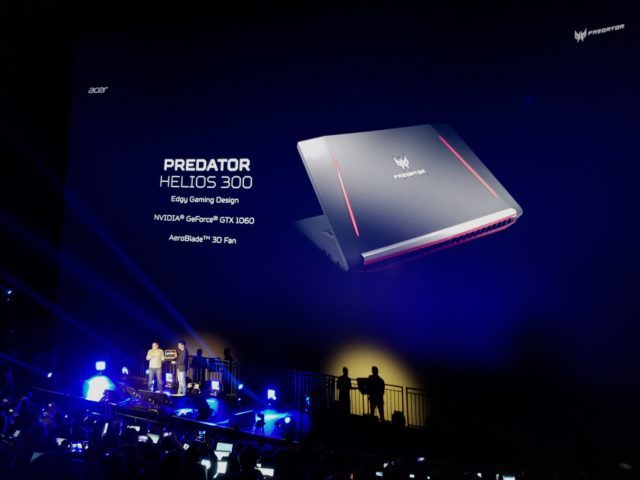 The Helios 300 actually has similar specs to the aforementioned Triton 700 but with a different form factor more reminiscent of the rest of the Predator lineup. 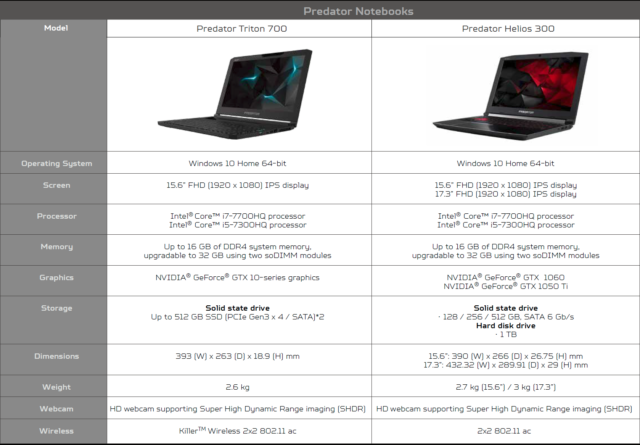 Both have decent specs, including latest i7 processor options as well as up to 32GBs of RAM if you wanted. The Z24 has an option for a mobile NVIDIA GPU 940MX, while the U27 is limited to an Intel 620 integrated graphics card.

As far as the rest of the specs go, they’re pretty similar. 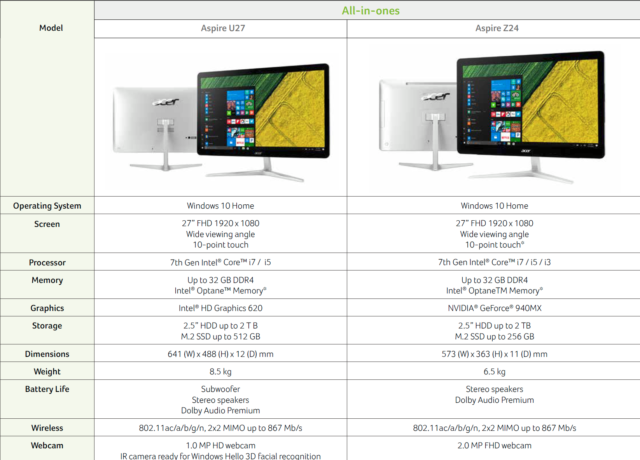 The impressive part is how thin they each are 11 and 12mm thin along with the fact that the U27 is using the LiquidLoop proprietary cooling system that Acer launched last year to cool it while keeping it virtually silent. 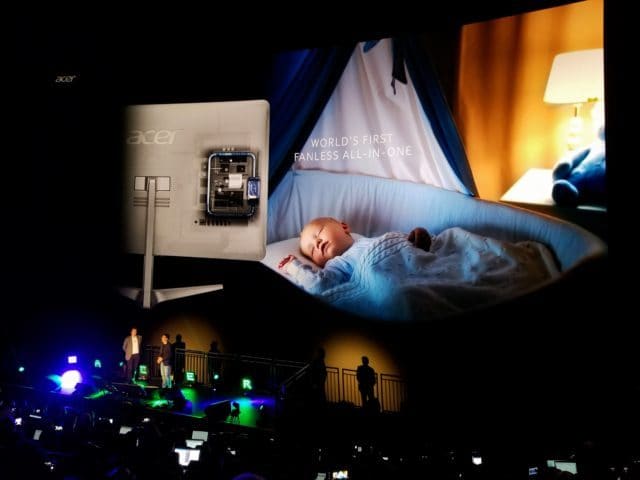 In addition to these products they launched a plethora of others including a smartwatch, a standalone 360 camera, a bunch of new Aspire laptops, a metal version of their Swyft 1 and launched a new Swyft 3 and Swyft 5, a mixed reality headset in partnership with Microsoft, and more. Check out the full press releases and images below for more info on everything they announced.

Anything you guys are particularly excited about? What devices would you want to see video reviews on? Let me know in the comments below and for future reference, if you want to follow along with the news as I’m at any events, follow me on Twitter where I post as I go. Thanks for reading!