You are here: Latest Tech » How Powerful is the World’s Most Powerful Laptop? (Acer Predator 21X) (Video)

I wish I was there. When someone at Acer went to their engineers and said “Let’s make the world’s most powerful laptop.”

You could see them all look at each other and ask, “Wait, what about pricing, portability, practicality?”

“None of that matters, just make the most powerful laptop you can.” And then the excitement from the room as they all went off to start sketching things, or whatever engineers do.

That has to be what happened with this laptop, it’s a testament to what is technically possible in a gaming laptop. Yes, it is for sale, for $9000 and with everything else about it, it’s not something your average consumer would even consider buying. So I’m not going to do a review, instead I’m going to do what I think a technical masterpiece like this deserves–put it through its paces and see what those engineers were able to accomplish.

So first up, besides benchmarks (which, don’t worry, we’ll get to), let’s talk about some of the crazy tech they managed to squeeze into this behemoth. 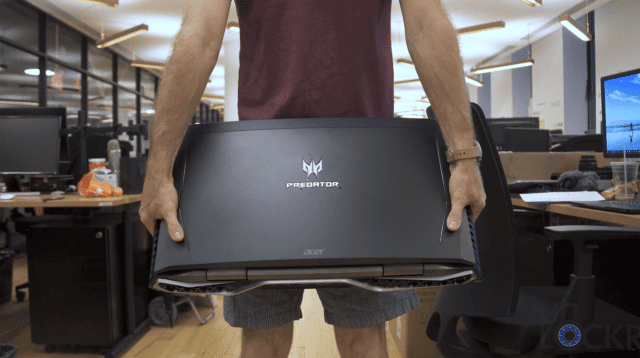 And it is a behemoth, weighing 18.74 lbs and over 22″ wide, is physically dwarfs every other laptop. Period. But, the impressive part of this is the fact that every millimeter is crammed with some form of tech or another.

The bottom half, has every port imaginable. 1x SD card slot, a headphone jack, microphone jack, 4x USB 3.0 ports, on HDMI 2.0 port, 2x Display Ports, an Ethernet Port, and a USB 3.1 Type C Thunderbolt 3 port. It also has not one, but two AC power ports for the two AC power adapters required to power this thing that can be held together with a nice rubber brace. 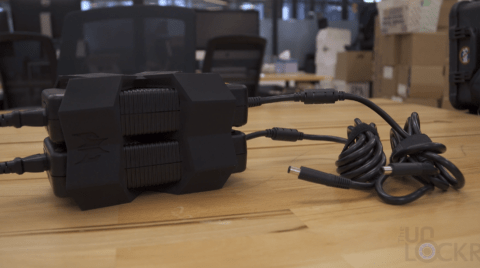 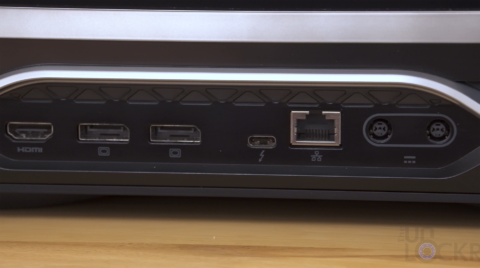 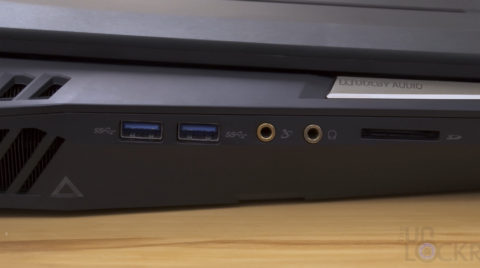 In between all of these ports, taking up every other inch of frame are air vents which are connected to the 5 fans (3 of which are Acer’s new patented AeroBlade fans that are impressive in their own right) and 9 heat pipes used to keep this thing running cool. 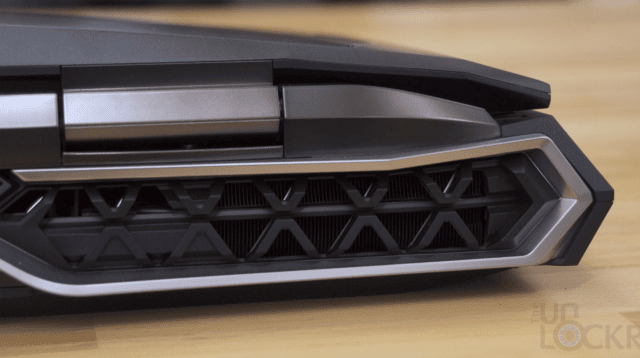 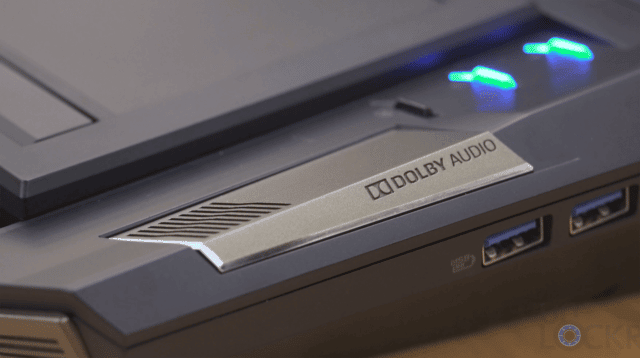 Then, at the front, when you think there’s nothing there, there’s even magnets to hold the included wrist rest that comes with it.

The top half is no less packed with tech. The screen is a curved, yes curved, 21″ 2560×1080 display with a 120ghz refresh rate and 21:9 aspect ratio, which of course is laced with an LED backlit logo and strips along the sides. 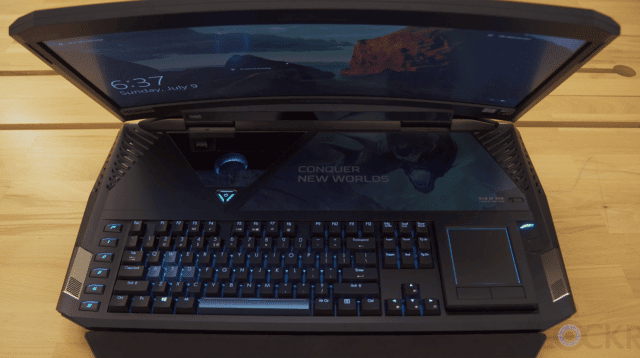 There’s even Tobii Eye Tracking under the bottom of the screen which can be used to control the mouse (you can actually hold your finger down on the trackpad while looking somewhere to get the mouse to jump to that location) but is mainly used for the the over 45 titles to have HUD options fade in and out, place commands to target enemies, control the in game camera and look around in a game with, and more. 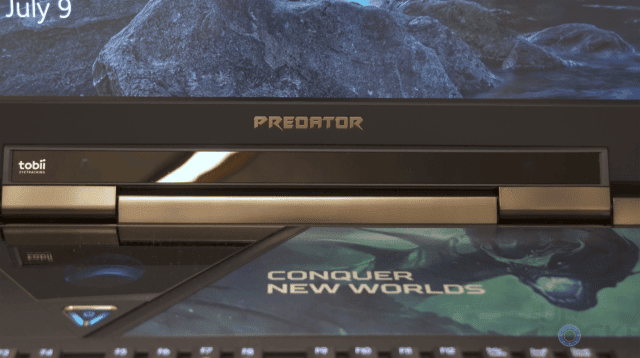 And, because why not, there’s also a 720P webcam at the top.

The keyboard is a Cherry MX Switch mechanical keyboard that is, of course, super clicky and is backlit and customizable with up to 16.7 million colors. There are 6 customizeable keys to the left and a precision touchpad that magnetically attaches and can be flipped over for a number pad should you want to use an external mouse and have more keys at your disposal. 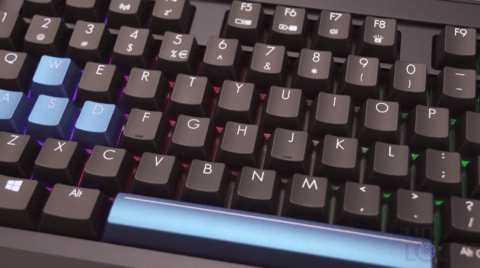 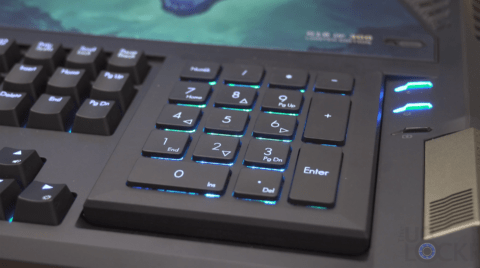 Along the top there’s a window to show off some of the internals including a fan lit up by an LED and a large panel that can also be customized on ordering with country flags, and different images. Cleverly though, this plague is also an easy access panel to get one of the 5 storage bays and two slots for RAM (you can get to the other RAM slots and other 4 M.2 storage bays by unscrewing the bottom of the laptop).

Which brings us to what is inside this laptop that’s powering all of this. We have 64GBs of DDR4 RAM, a 7th Gen Intel Core i7-7820HK overclockable CPU, and not one, but two NVIDIA GTX 1080 GPUs in SLI configuration giving you 16GBs of dedicated GDDR5X VRAM.

Which brings us to the question of what can this loosely named laptop handle?

So first, Benchmarks. Now, first up, the CPU is overclockable using the Acer included software so we’ll turn that all the way up. Second, I’m going to grab stats from the Acer Predator 21X as well as the Razer Blade which is a populer gaming laptop just for comparison’s sake, but you can take these numbers from the test and compare them to other laptops online for your self. 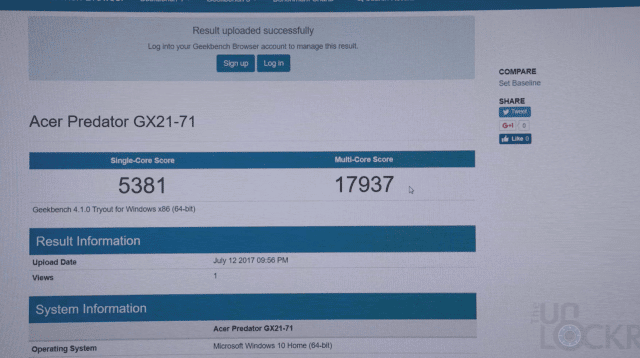 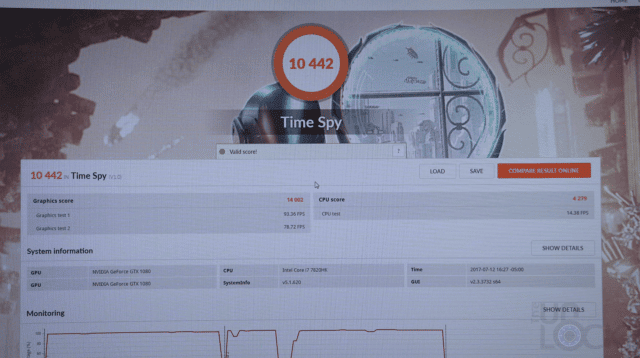 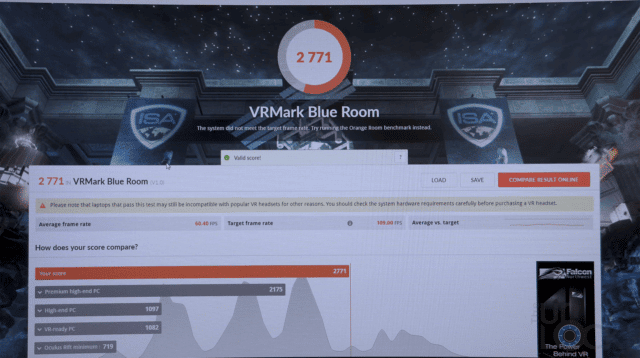 Then how about rendering 4 mins of 4K footage out at the YouTube 4K preset in Adobe Premiere. 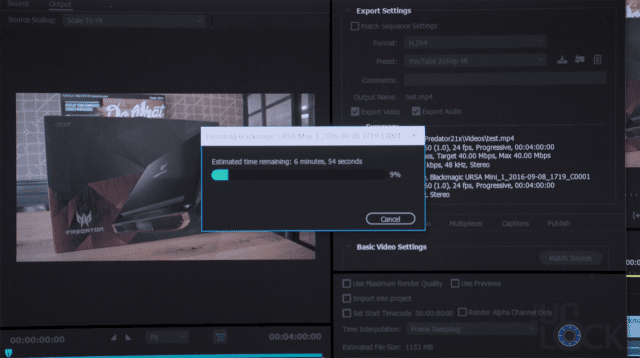 Now, let’s try an actual game and just see how it runs. You guys mentioned me trying out Witcher 3 since it has some pretty intensive graphics when you turn everything all the way to maximum so let’s play that for a sec.

How about we try that again, while rendering that same footage out in Adobe Premiere.

Ok, how about playing the game on max settings, rendering that footage, streaming a 4K video on YouTube, streaming music from Spotify, and running a VR simulation at the same time? 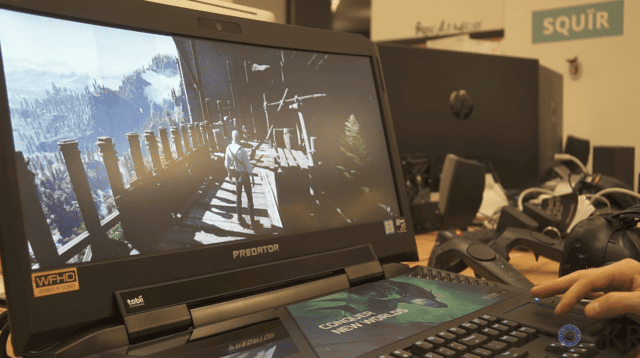 Not a single hiccup.

And there we go. For your average person, there probably isn’t much you could throw at this laptop that it couldn’t handle. Now, again, it’s not a very practical laptop, but it is an amazing showcase of what is possible right now in a laptop and I have to applaud the engineers at Acer.

The most exciting part about all this to me? At the rate that technology is advancing right now, I don’t think it’ll be that long before we get this kind of power and features in something more along this size. I can’t wait.