You are here: How To's » How to Make the Apple Logo on Your iPhone Light Up Like a Macbook (iPhone 6 & iPhone 6 Plus) (Video)

Sometimes it can be hard to make your iPhone stand out in a sea of iPhones. You can jailbreak the phone and then change all the icons, you can find a clever unique case, but beyond that, there’s not a whole lot to differentiate your iPhone from all the others.

Today though, I’m going to show you one of my favorite tweaks for making my iPhone stand out in a crowd.

You know how the Apple logo on a Macbook lights up when the screen is on? Well, using a small kit, we can make our iPhone 6 or iPhone 6 Plus do the same thing. Needless to say, it catches people’s attention – especially while sitting in a dark bar – and garners a lot of “What the hell…” responses and it’s inexpensive to do, doesn’t affect the battery life of the phone, and isn’t terribly hard to do.

If you’d like to give it a try, I’ve put together a video on how exactly you can do it below. Please keep in mind, however, that this does require opening of the phone and that’ll void your warranty (if you’re phone is over a year old you are out of warranty anyway, but if not, keep that in mind). Also, this isn’t really for the faint of heart so please understand that you are performing this at your own risk and I am not responsible if you mess up the phone.

Looking for the light kit for the iPhone 6S or 6S Plus instead?

With the disclaimer out of the way, here’s how to make the Apple logo on the back of your iPhone 6 or iPhone 6 Plus light up like it does on a Macbook.

1. Again, you are doing this at your own risk and I am not responsible for your actions. This will also void your warranty if you still have one.

Get the iPhone Light Kit and Tools

You can head here to purchase the light kit.

Make sure to purchase the one for your specific model of iPhone.

Install the Light Kit on the iPhone

Once the kit arrives, here’s how to install it.

2. Using the provided pentalobe screwdriver from the kit, unscrew the two screws at the bottom of the phone on either sides of the charging port.

3. Using the suction cup from the kit, put it on the lowest part of the screen you can and pull up on it. This will create a small gap under the screen at the bottom of the phone. Put the pry tool into that gap and slowly turn it to separate the screen from the casing. 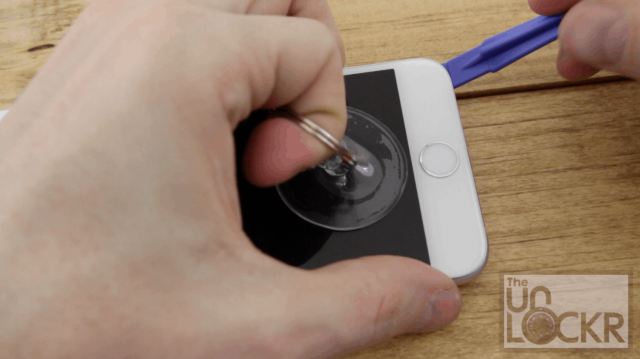 4. Once it is separated, pull the screen back to 90 degrees (don’t go past that as it’ll break the cables that are holding the phone to the motherboard.

You don’t need to remove the screen from the casing, but it might make it a little easier to remove the battery (more on that later) so if you want to follow the next few steps to do that, otherwise you can skip these and continue in the next section.

I’d recommend trying to do this without removing the screen as it makes it a lot faster to install and if you end up struggling to keep the screen upright while doing the rest of the tutorial, then go ahead and use these steps to remove it.

1. Unscrew the screws holding down the metal plate over the screen’s cables and set these aside. I use a white piece of printer paper and put everything down so I know exactly where it goes back (some of the screws are slightly different sizes so keep that in mind). 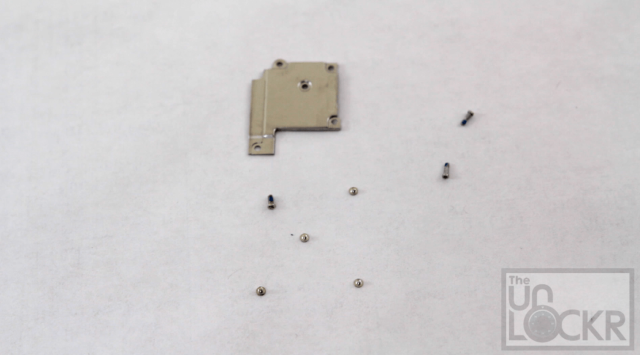 2. Remove the metal plate and set that aside as well.

3. Using the pry tool or your fingernail, disconnect the cables and then the screen will disconnect and you can set that aside.

Removing the Battery and Apple Logo

1. Remove the screws holding down the metal plate near the bottom right of the device that is over the cable connecting the battery.

2. Remove the metal plate and set that next to the screws.

Here’s the hardest part. We need to remove the battery from the casing and Apple glues the crap out of it so it’s not easy to do. Just do the following very slowly and carefully and try not to puncture the battery, if you do you can buy another replacement relatively cheap from here. 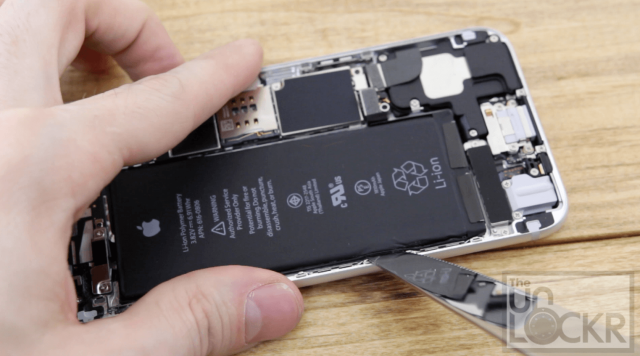 UPDATE: Thanks to some smart people in the comments, you can apparently pull the to flaps at the bottom of the battery and pull them straight down to get the glue out instead of all this heat and prying. Try that first and then if it doesn’t work use this way to get it out. Thanks to everyone who recommended this!

4. Using a butterknife or another small, flat metal object, wedge it under the battery little by little to separate the battery from the glue underneath it. (Optionally, you can use a blowdryer on the back of the phone to heat up the glue a little to make it a little easier to remove. Just don’t heat it up to where you can’t hold it as that’ll be too hot and damage the internals of the phone itself.

5. Once you finally do that (again, be patient, it’ll take a while), remove the battery and set it aside.

6. Using the pick or your fingernail, remove the two pieces of tape holding down the metal Apple logo under the battery.

7. Using one of the screwdrivers, pry up the edges of the metal logo bit by bit until you can peel it away. Set this aside as we can reinstall this if we ever want to undo the light kit.

1. Insert the light kit so that the LED is placed into the new Apple shaped hole left by the metal logo. Make sure it’s snug.

2. Put the two pieces of tape we removed earlier back on to just help hold it down.

3. Put the battery back in but do not connect it just yet.

4. On the underside of the screen there is a tiny cable coming from the top left of the earpiece. Carefully scrape away the tape on top of it so the three metal connectors are exposed (see video or below). 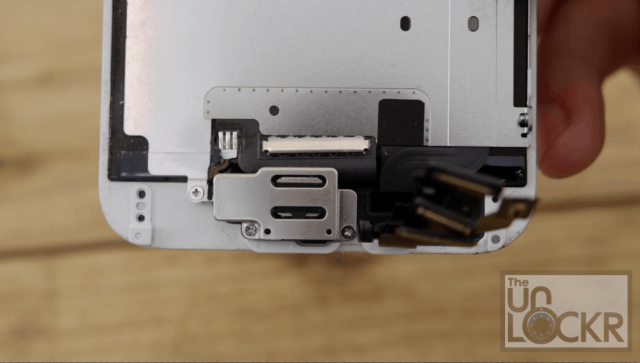 Reconnect the Screen (if you removed it)

At this point, we need to reconnect the screen if you removed it in the steps above.

1. Reconnect the cables from the screen to the motherboard.

2. Replace the metal plate on top of them and screw that back down.

1. Take one of the small sticky sponges from the light kit and add it to the very top of the skinny part of the light kit cable to form a T shape (perpendicular to the cable). 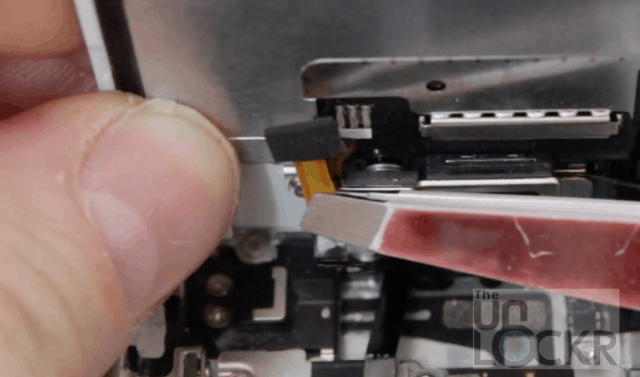 2. Now connect that part of the cable to the newly exposed connectors on the back of the screen.

*For iPhone 6 Plus, see this comment from a reader on how to line them up properly (thanks, Tom!) –

The kit for the iPhone 6 Plus has 3 conductors. I found that only by centering the kit’s middle conductor on the mating iPhone conductors did the two outside connections seat properly, without shorting other pins on the iPhone’s connector. David, thank you for this really terrific kit! – Tom King

3. Take another sticky sponge from the kit and stick it vertically to the right of the cable so that it is half on the cable and half on the back of the screen. 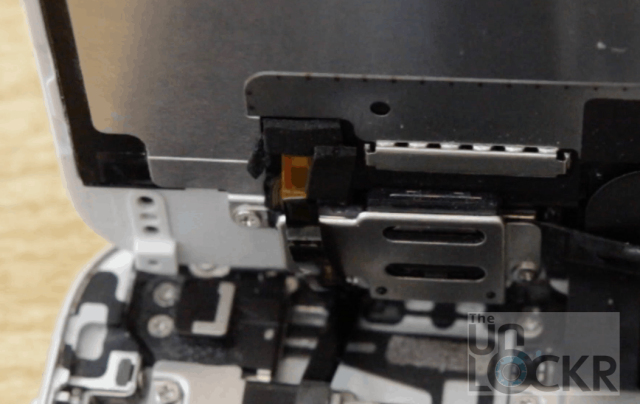 4. Finally, stick the electrical tape that came with the kit over it all so none of the light kit’s exposed cable is visible. We need this to be as covered as possible as if it isn’t insulated the logo won’t light up (this is where you need to inspect should the logo not work right away). 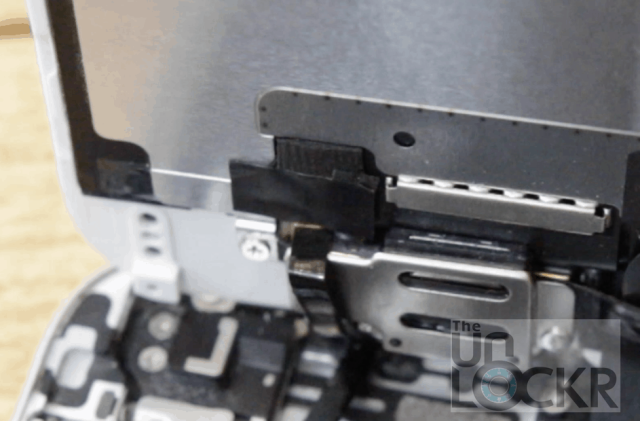 1. Reconnect the battery to the motherboard and replace the metal plate on top.

2. Screw the metal plate back down.

3. Using the last piece of electrical tape from the kit, tape down the lower part of the LED’s cable where ever it’ll fit in the bottom of the phone.

4. Put the screen back down and carefully and slowly press on the sides to snap it back into the casing (be careful not to crack the screen).

5. Put the two screws back into the bottom of the device to close it back up.

Enjoy! Let me know if it worked for you below in the comments!

Here’s a video for those having issues getting it to work!

Solution: This actually happened to me the first time I installed it. Simply open the phone back up (make sure to turn it off first), remove the sponges and tape attached to the exposed cable on the back of the screen and put them back. Just make sure that everything is stuck down well and that there is no exposed cable. What happens is that if this isn’t taped up very well and/or the sponges aren’t where I told you to put them, electricity will escape from the back of the cable and not go into the LED (and that means no light).

Issue #2: I broke the battery while trying to remove it.

Solution: Again, this has also happened to me when I’ve gotten a little too impatient with the glue. If this happens, just order a new one from here. They aren’t expensive but it just means you have to wait until the battery arrives before you can use the phone, of course.

Issue #3: There are lines all over my screen what do I do?!

Solution: The cable isn’t on correctly when you removed and put the screen back. Check this video out for help.