You are here: How To's » Apple Wireless Sharing Looks To Compete With WebOS ‘Touch To Share’ 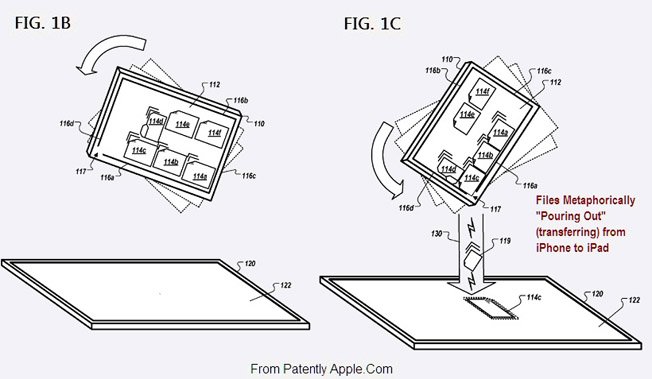 Patently Apple has unearthed news that Apple has been testing a new wireless sharing feature that would allow users to transfer files between iOS devices with ease. Apple undoubtedly is looking to compete directly with HP’s ‘Touch to Share’ feature, which enables the Palm Pre3 handset and TouchPad tablet to share files with one another.

How exactly is Apple looking to stand apart? The patent describes Apple’s technology to include visual and audio effects. This suggests that an iOS user would be able to not only see the files being shared but hear them in an animated fashion. The technology could also feature physical intuitive gestures. For example, imagine physically ‘pouring’ your iPhone into your iPad to share music files or transfer photos.

The patent number 20110163944 was filed in 2010 and does not disclose any information regarding when Apple plans to implement the sharing technology. Seeing as Apple has been quietly at work for the last 18 months on the technology, the unveiling will only happen when Apple is good and ready.