OK, part two of my series on putting the top 2017 phones to the test (if you haven’t seen the first one, check it out at the link below when you’re done here). Basically, though, I’m taking the best phones of 2017 and putting them side by side in some scientific, not really that scientific, tests. Today’s test is battery life.

So for this test, I picked the phones that in my own personal use case have the best chance of winning this and put them against one another. This means that any of these phones are already really good for battery life, but I wanted to see which was the absolute best. For this, I have a Huawei Mate 10 Pro, an LG V30, OnePlus 5T, Essential Phone, Samsung Galaxy Note8, a Pixel 2 XL, and an iPhone X.

Now, for the test, the only thing I can replicate the same across all of the devices are playing a YouTube video nonstop while they are all without SIM cards and are just connected to the same Wifi until they die. Now, of course, this isn’t a real-world scenario but it’s the only consistent thing, if you have a better suggestion for the next one, let me know. 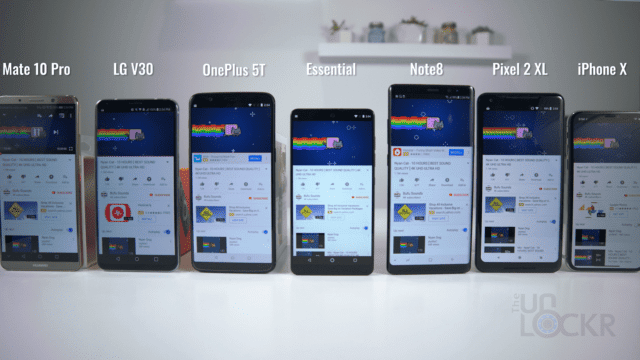 First one to die is the Essential after a still respectable 8 hours and 14 mins (again all of these phones have decent battery life that’s why I picked them, but this is about who has the BEST). Next is the iPhone X followed almost immediately by the Pixel 2 XL which surprised me cause I feel like the Pixel 2 XL lasts longer than my iPhone X by more than just two mins but there we go.

Next, we lose the OnePlus 5T and then almost immediately followed by the V30 and not too much longer after by the Note8.

The Huawei Mate 10 Pro though, still going strong until it finally dies at 11 hours and 22 mins, over 3 hours after the Essential.

And there we go. Surprised me, for sure. I mean the Mate 10 Pro winning didn’t really, nor the fact the Note8 was close behind but the Essential always felt like it had good battery life to me (and it does, again these all have good battery life) but the fact it died so soon compared to the others is crazy, and same for the Pixel 2 XL. 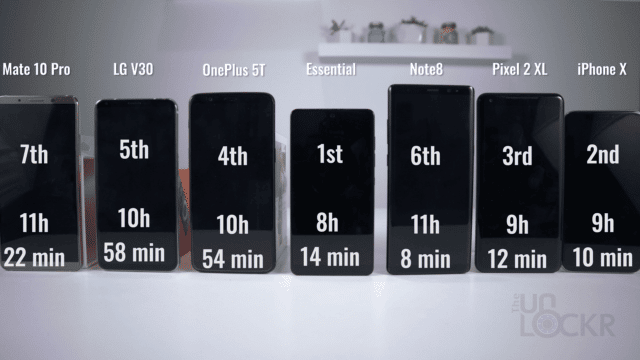 Anyway, experiment done. Let me know what you guys thought of the results, again it’s not a super scientific test of course but let me know if you have any ideas how to improve it for the future and also if there are any other tests like this you want me to do as I kinda enjoy doing them and figuring this stuff out with you guys.