Have another camera comparison for you guys. Today, we’re pitting the OnePlus 6 up against the reigning champs of phone photography here in the US. It’s the OnePlus 6 vs the Pixel 2 XL vs the iPhone X vs the Galaxy S9+.

For this comparison, I went out and took the same photos to the best of my ability with each of the phones and left everything on auto to just see how the device handles each scenario on its own (the way the majority of people would be using them). So let’s dive right in to the photos, shall we? 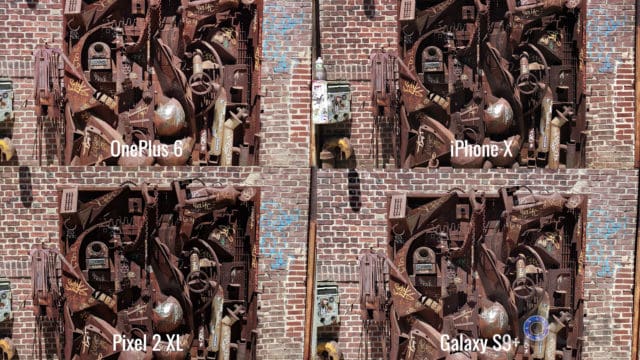 The first one is of a piece of metal art near my apartment actually. Now, we can see that all of the phones decided on the same coloring basically, and they’re all pretty sharp. 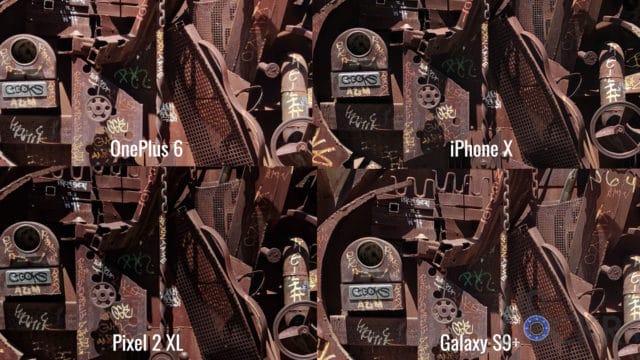 When we zoom in, we can see that the OnePlus 6 though is just a hair worse at the dynamic range, or simply put how bright the brightest parts of the image are versus how dark the darkest parts are. I have to admit though, it’s damn close to the Galaxy S9+ and keep in mind throughout this entire comparison that the OnePlus 6 is a decent chunk cheaper than all the other devices in this (I’ll do another comparison with some other devices in the same price range soon). 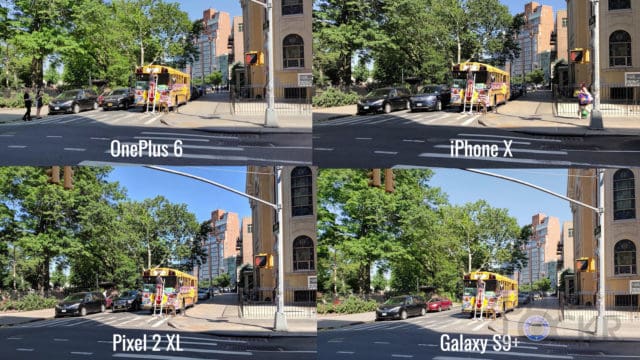 Next up, I found this lady painting her school bus, you know, normal, everyday occurrences. Again, a similar result (similar lighting too really so probably has something to do with it). They’re all pretty sharp and chose similar color science. 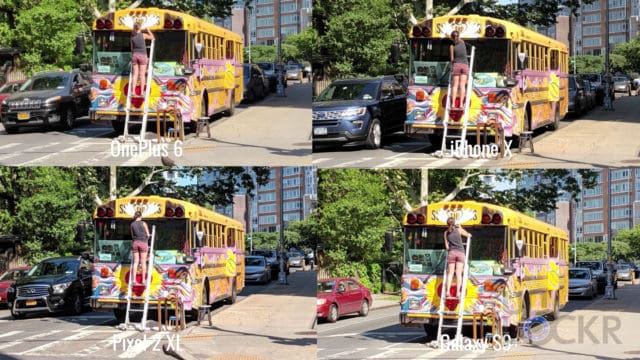 Again, upon zooming in, we can see that the Pixel 2 XL and iPhone X have the best dynamic range (check out the leaves on the tree in the background for a more prominent example by the way) and the S9+ maybe has a tad better but the OnePlus 6 is right behind it if not almost, maybe on par with it. Crazy. 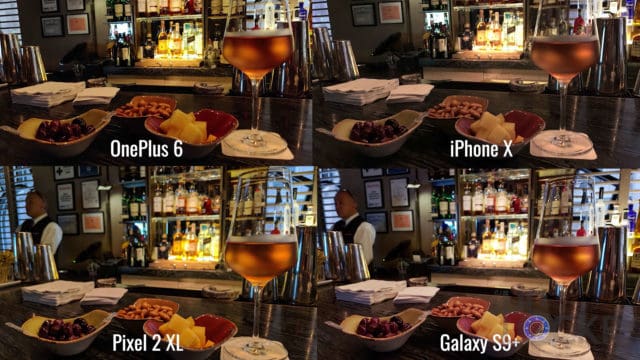 OK, and now for some more difficult shots, not in bright daylight. This one in a not-horribly-but-not-great-lit bar. On first glance, the iPhone X went cool for the color temperature (in other words leaned more towards blue than red on the spectrum of color) and the S9+ sort of made the same decision, while the Pixel and OnePlus both went warmer. You can also tell that the S9+ image might be the brightest of the bunch, if only just. To the point though, that the bottles in the background on the bottom shelf are a little blown out even. You can also see that the Pixel 2 XL actually had the best bokeh with everything behind the food and wine to be a bit more blurred than the other phones while still keeping those items sharp. 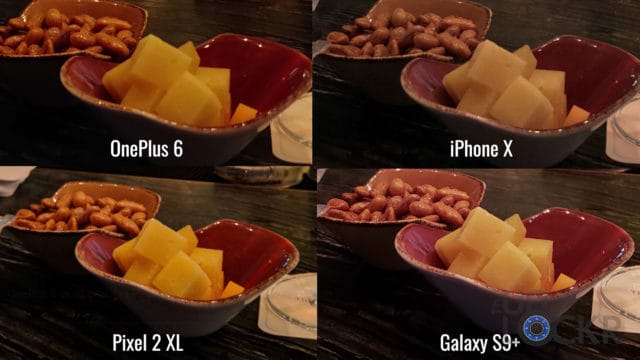 Zooming in we can see where the OnePlus 6 falters a bit. The cheese is just clearly not as sharp as the other three devices. And honestly, I’d give this one to the S9+ as that’s the most realistic looking of the bunch. 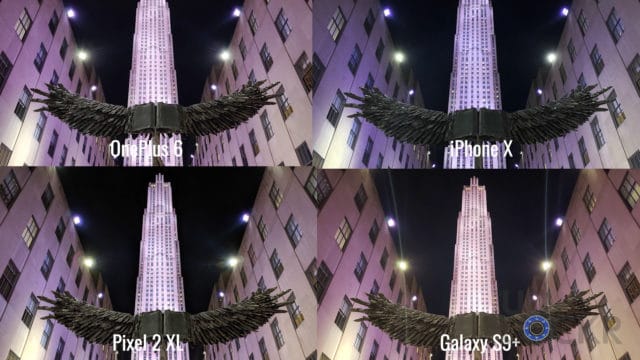 Next, we have a night shot of this cool art installation near my office in from of Rockefeller Center. We can easily see the iPhone X doing it’s blue/cool thing and the Galaxy S9+ actually doing the opposite and going pretty warm. 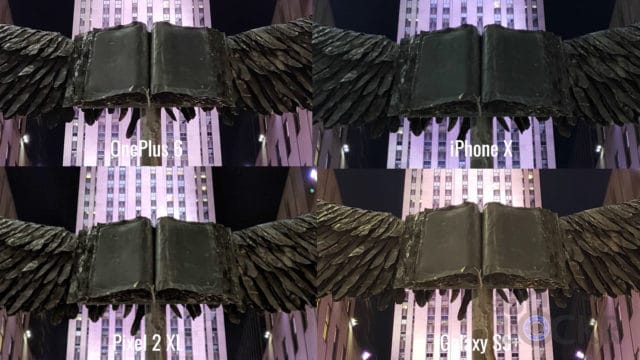 Zooming in, I’d say we’re getting a bit more bokeh on the Pixel 2XL than any of the other devices and looking at the feathers you can see they all did a pretty good job of keeping the image sharp. I’d even go so far as to say the OnePlus 6 not only kept up with all the other devices it might have even taken the best photo in my opinion on this one. 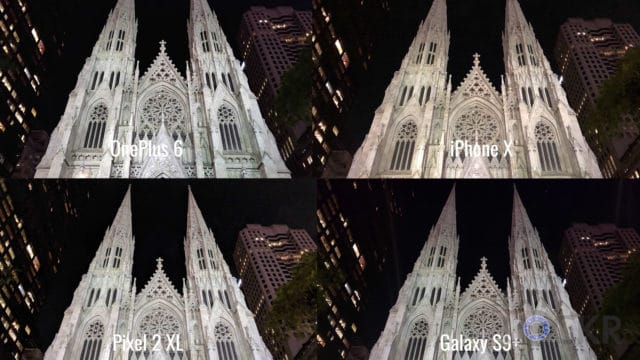 Next, we have this church. Now, we can immediately see that the Pixel 2 XL’s HDR did the best job here. Take a look at the building in the background on the right in that photo and the tree as well and how well lit they are compared to all the others. Otherwise though, I’d say the OnePlus kept up again with the others. 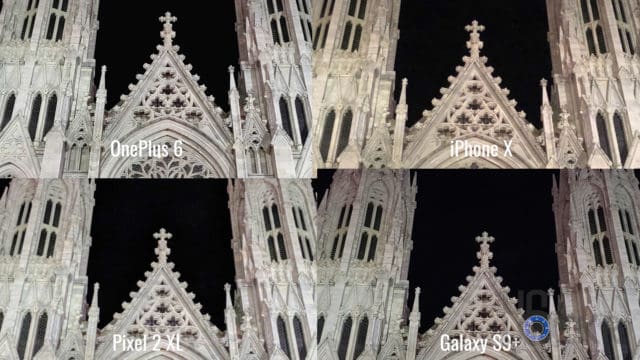 Zooming in though we can actually see that the iPhone and the Pixel both had a little weirdness going on, looks like a blur from the HDR not overlapping the images correctly maybe, while the S9+ and the OnePlus 6 nailed it and are a lot sharper.

So overall, I think we can safely say that the OnePlus 6 keeps up with the other devices to some degree. I’d even say the camera might be as good in daylight as the S9+ while the S9+ squeezes past it slightly in low light shots (probably thanks to that wider aperture). And while the Pixel 2 XL and iPhone X do beat it in a lot of the photos, it’s not too far behind. So it seems that for the price of around $500 compared to the cost of these other devices it’s definitely worth the money.

Let me know what you guys think!