You are here: Tech Explained » Does Turning Off Your Phone Make It Charge Faster?

So this video is a bit of a myth-busting episode, I suppose. You see, there are little things in the tech world that we all say to each other and assume are true but I feel like should actually be tested and proved right or wrong. One such thing and what I want to test today is the claim I’ve heard over and over that if you turn off your phone while it is charging, it’ll charge faster. So I grabbed an Android and an iOS phone (P30 Pro and XS Max to be specific) and charged them both for 15 mins while on and while off to see if there was any change in the speed. Here’s what happened.

Really fast though, before we get to that. I need to give a quick shout out to the sponsor of this video: Trademore. Check them out at the link below to trade in your old gadgets to get some extra cash to buy some new gadgets maybe like the phones in this video even!

First, check out the sponsor of this video, Trademore. A great place to buy and sell electronics (and help you afford these new phones for that matter).

Now, I’m using the included chargers for both of these devices since I imagine that’s what most people would use on their phones. Keep in mind this isn’t a race though, I’m having two phones here just to see if there is a difference in charging speed based on OS. So, after 15 minutes of both charging while on, the way I think most of us would charge our phones normally, the iPhone XS Max is at 9% and the P30 Pro (thanks to that crazy fast charger it comes with) is at 43%.

OK, now, same test from 0% but now soon as they turn on from being plugged in, I turned them off and 15 mins later, turned them back on and we are at 9% and 43%. Exactly the same. 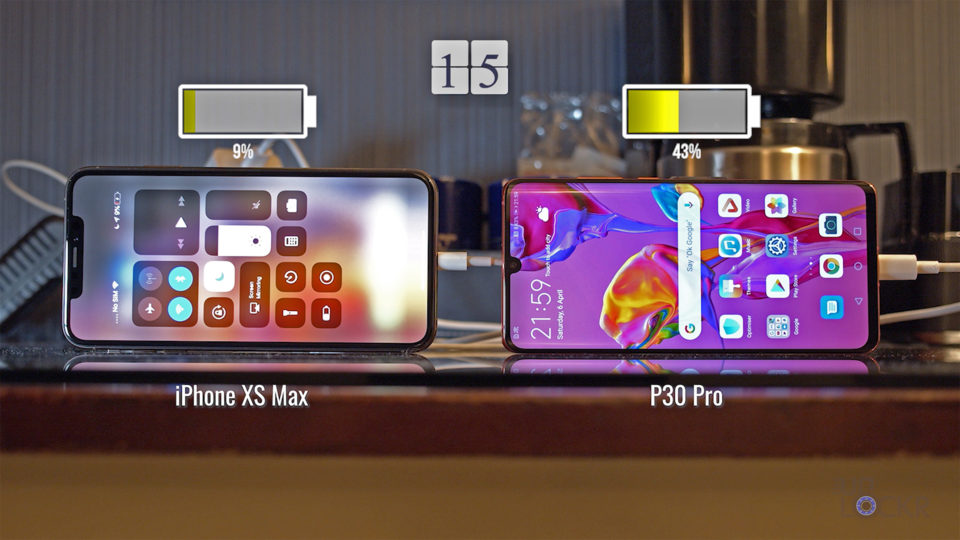 OK, the fact they they weren’t even a percentage off I think concludes this with a decent amount of confidence. I’m gonna call it along with the other charging videos I did on similar myths before that you can check out at the link below, it doesn’t matter what you do once the phone is plugged in aside from leaving the screen on the entire time (and even that doesn’t do much to the battery), it’s going to charge at the rate it does. Period.