Samsung just launched the Samsung Galaxy Watch, and while we’ve now rebranded and lost the Gear moniker, it is definitely their newest flagship wearable.

They were kind enough to let me use one (after they tried to kill me in a workout first) so I figured I’d try and do a  complete walkthrough on it for you guys.

If you aren’t familiar, a complete walkthrough on my channel is where I try and go through every feature I can on a device so you guys are better informed should you be in the market to go buy one.

And since I recently asked you guys how in-depth you wanted these and the majority of you wanted me to go as in-depth as I could, we have a lot to go through in this one so let’s get started with the hardware.

First up, it comes in two case sizes and three colors. But, for some odd reason, the sizes dictate the colors you can get. You have the choice of either a 46mm silver casing or a 42m casing in either black or rose gold. I personally went with the black in the 42mm size not because I wanted that color necessarily but because I have dainty wrists (#skinnyguyproblems). 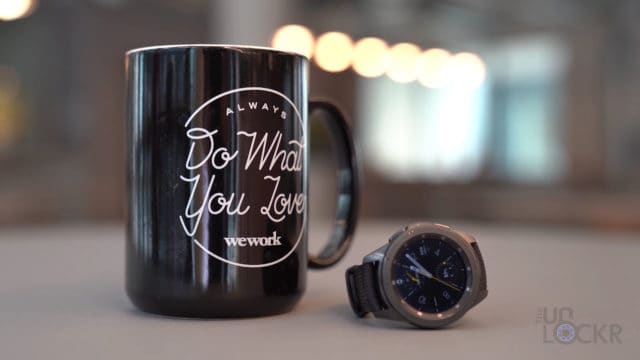 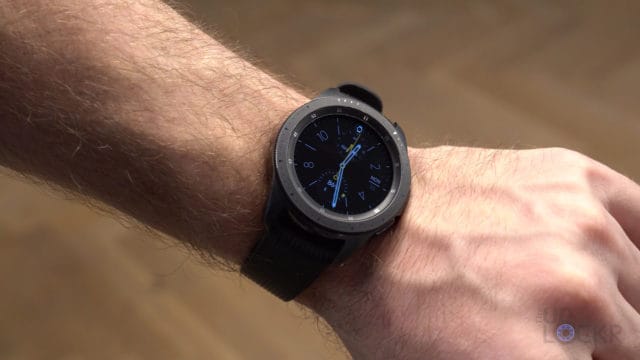 The bands you can choose from when buying the watches also are determined by the casing size so we have black, blue and grey for the 46mm and black, purple, grey, red, and “lime yellow” (someone needs to show Samsung a lime, please) for the black 42mm, and pink, grey, and brown for the rose gold. 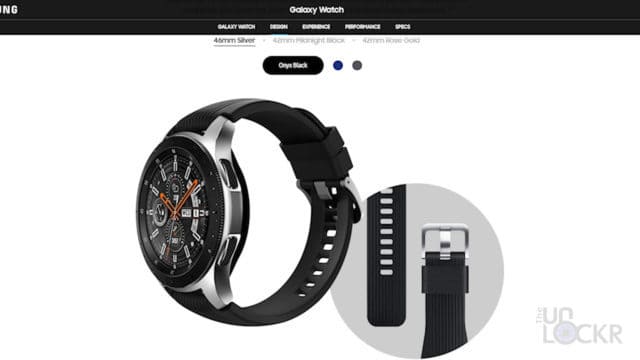 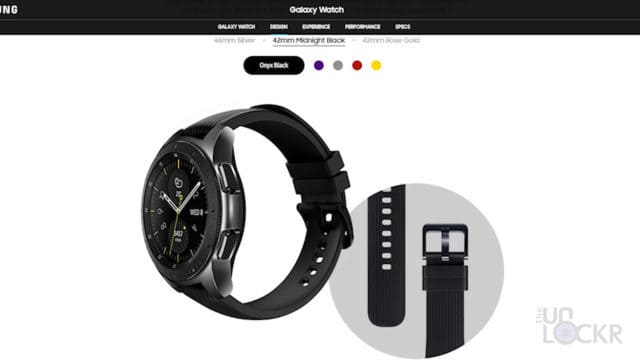 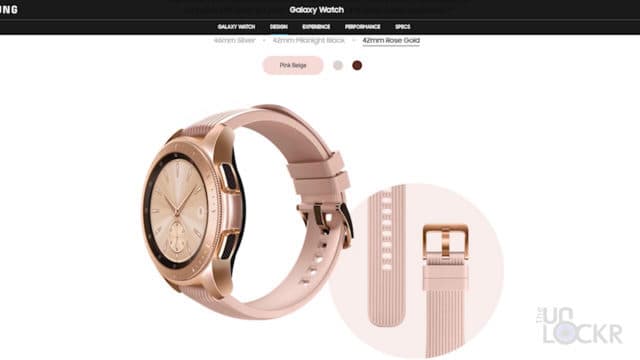 Regardless of which one you choose with the watch when you buy it, they both can take any quick release watch band (I grabbed a few different colored leather ones from Amazon for about $10/each that I think give it an entirely different look). You just need to look for 20mm bands for the 42mm case or 22mm bands for the 46mm case. 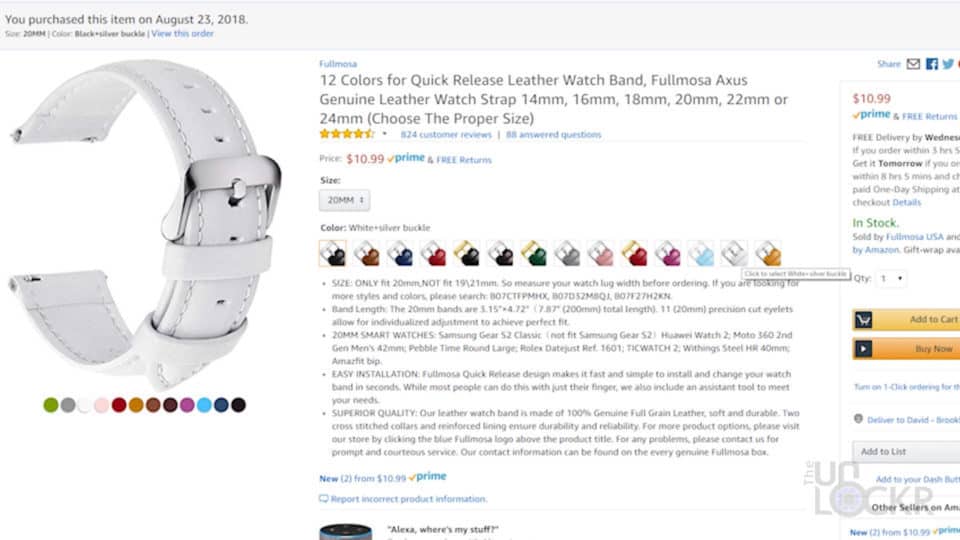 The watch is lightweight though and even though Samsung swears to me that it’s the same size as the Gear Sport, for some reason it feels smaller (which I’m happy about, even if it is an illusion of my own creation).

It’s military rated and finally, they’ve brought 5 ATM water resistance to a watch of theirs (their bands had this but not the full-blown watches). This means you can swim with it and it’s important to note that the 5 ATM is more important than an IP rating here because the IP rating doesn’t take slamming your wrist into water into account whereas this 5 ATM (or 5x the normal atmospheric pressure) does. 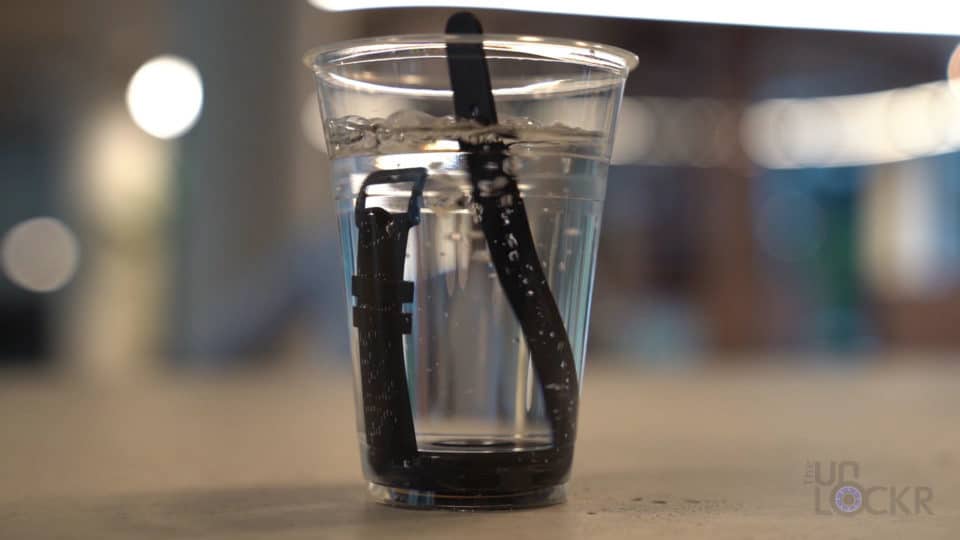 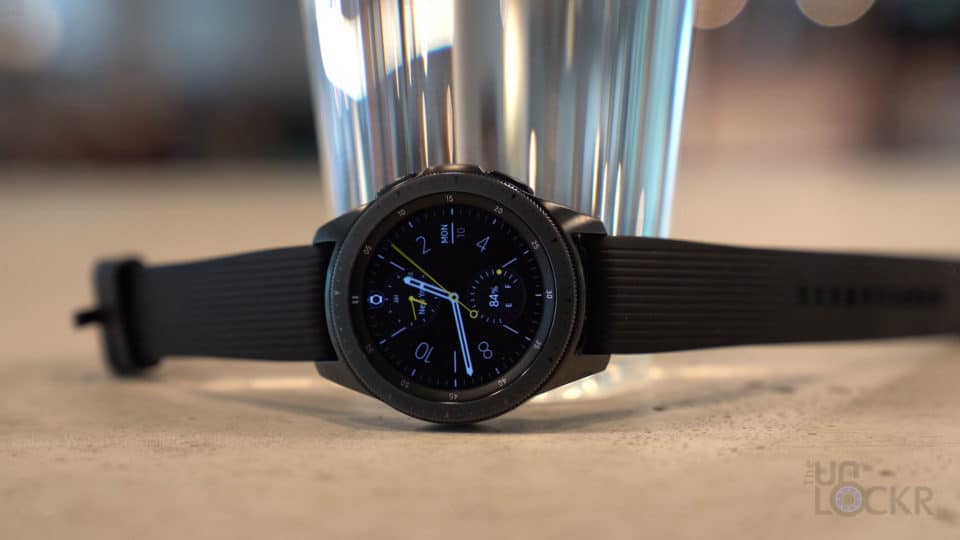 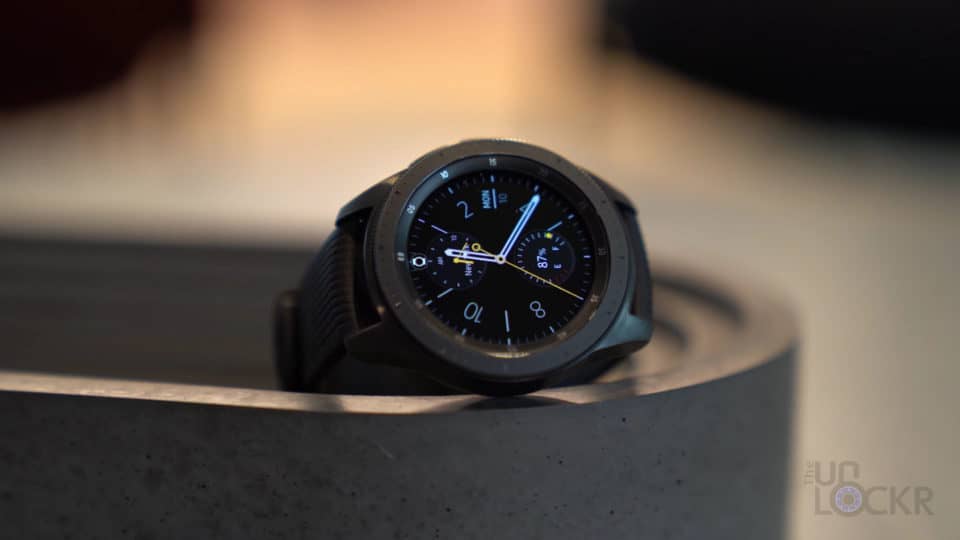 Surround that screen, we have the rotating bezel that Samsung has been known for now with these watches that allows you to use it to navigate the OS in addition to the usual swiping and tapping. Frankly, I love it for navigation and also sometimes use it as a fidget spinner. 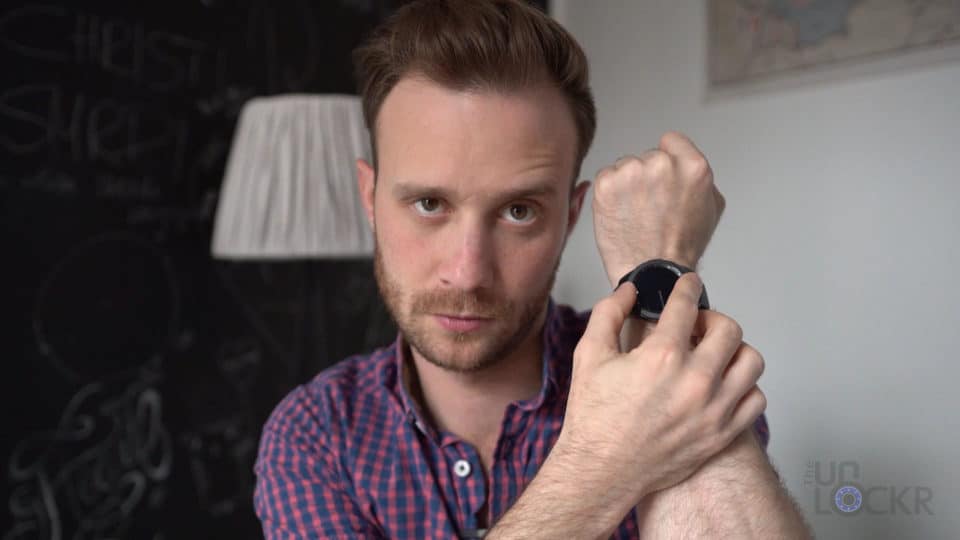 There are only two buttons on the watch, a back button for going to the previous screen in the OS that can be held down to get to Samsung Pay and a home button for getting you back to the watch face and when there and pressed opens the app drawer. You can also hold on the home button to turn the device on and off and toggle touch sensitivity mode (a way to have it react better to gloves when needed). 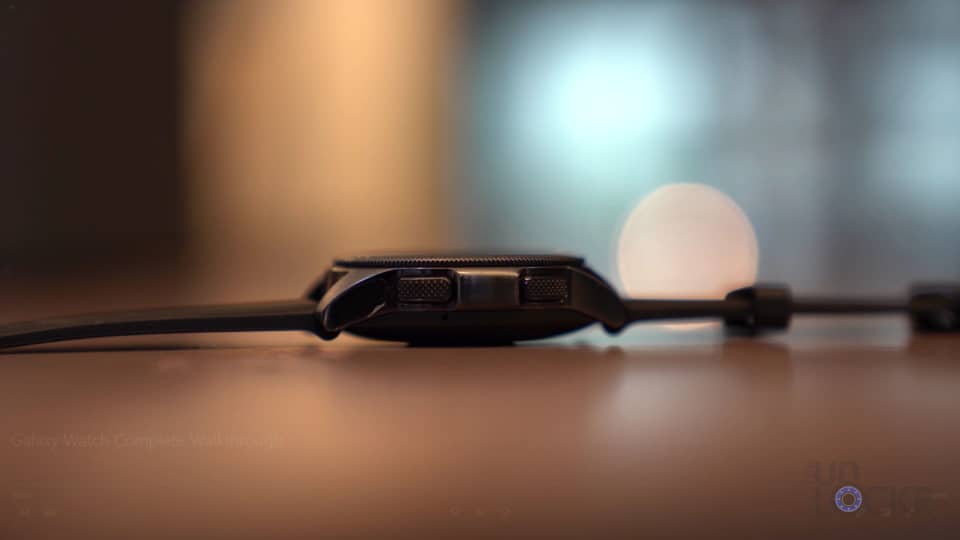 As far as sensors, we have a constant heart rate monitor which is a must for any serious gym rat, an accelerometer and gyroscope for movement and step tracking, a GPS for route tracking, a barometer for elevation measurements, and an ambient light sensor to control the screen brightness if you want. 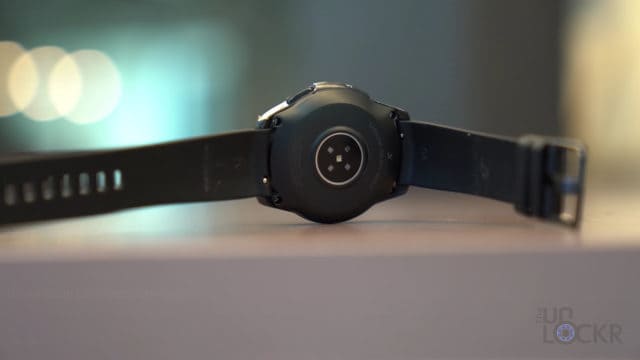 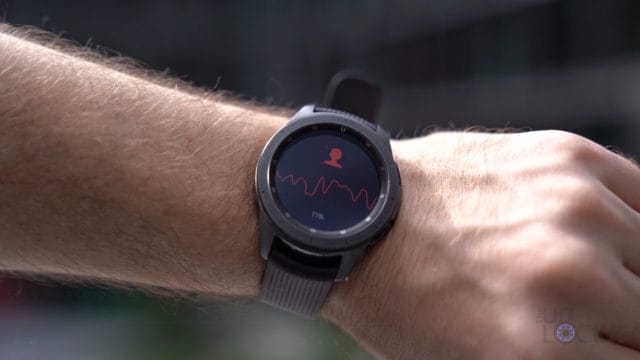 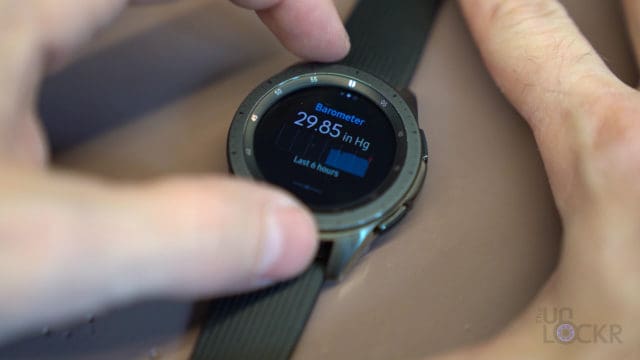 For batteries, there is a big difference between the two watches oddly enough. The 46mm has a 472 mah battery while the 42mm has a much smaller 270mah one. Samsung claims though that thanks to their own Exynos wearable processor inside the watch and the fact its running Tizen OS (which we’ll dive into more in a sec) you can expect 4-6 days of battery life on the larger watch and 2-3 on the smaller one.

In my testing with the 42mm one I have though, I managed to go about 24 hours without plugging it in. 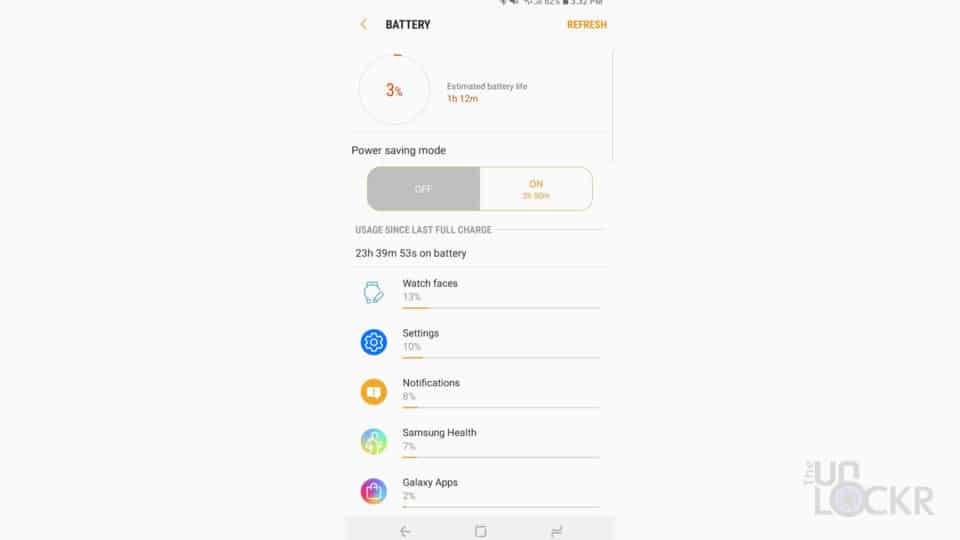 The watches also all have NFC for use with Samsung Pay. 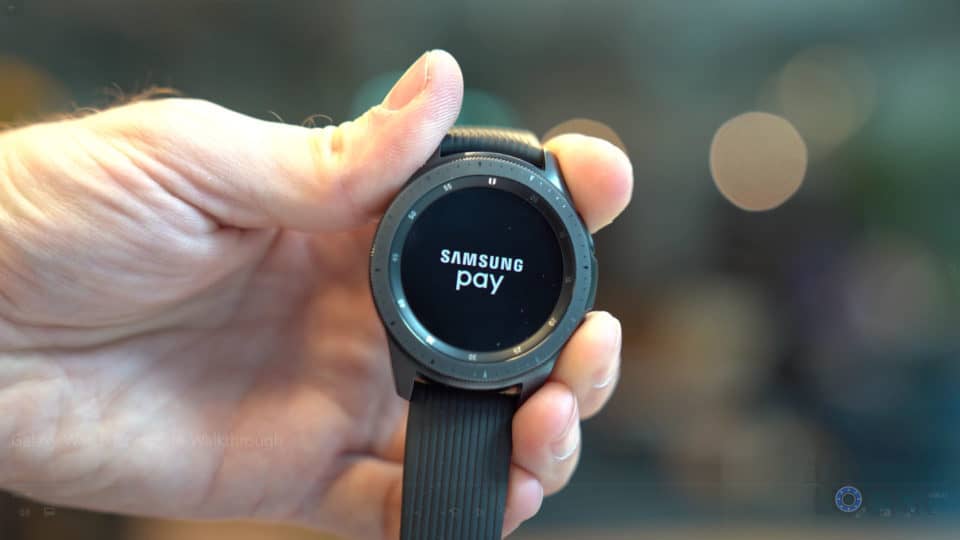 There is 1.5GBs of RAM and 4GBs of internal storage and thanks to their continued partnership with Spotify, you can even download playlists directly to the watch’s internal storage and pair your Bluetooth headphones to the watch instead of your phone and leave the phone behind (you can also use the Samsung Music app to do this as well but who no one uses that). 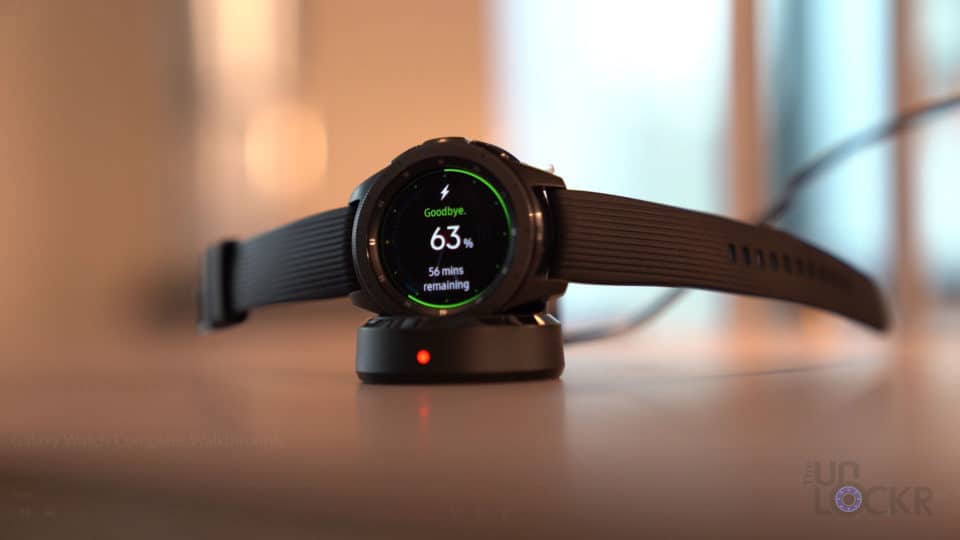 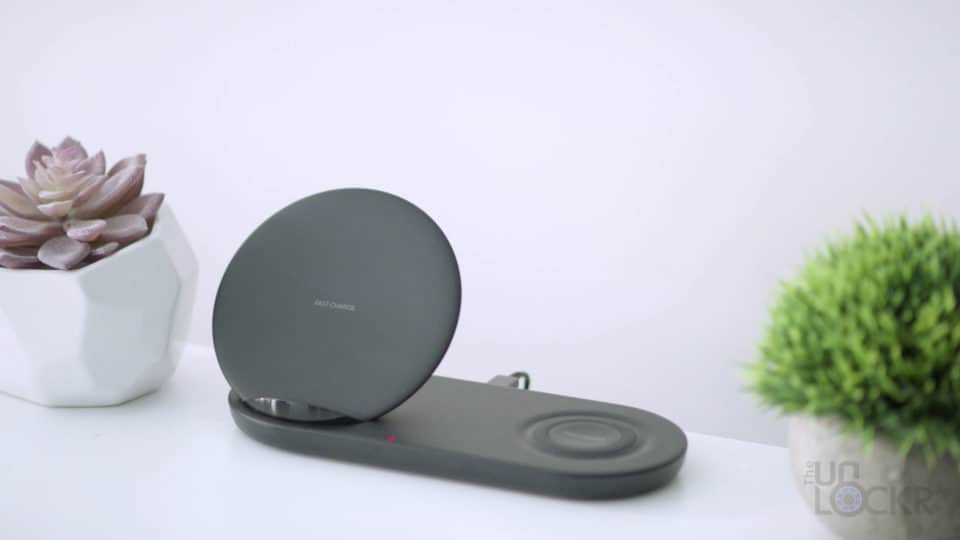 OK, now, really quickly, let’s go through the OS itself to give you an idea of how you use the watch. 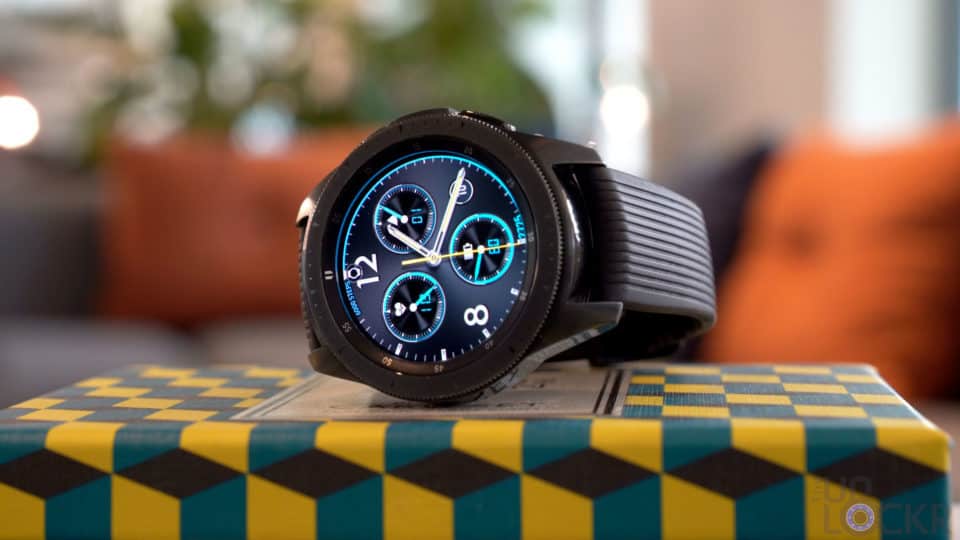 Swiping or using the dial you can go to the left of the watch face to see all of your notifications (which you can swipe up on to dismiss or tap to interact with) and to the right to get to all of your watch widgets. These can be edited by tapping and holding on them and added by going all the way to the right and tapping the plus icon there.

Pushing the home button on any screen will bring you back to the watch face. Pushing it while you are on the watch face will open the app drawer and you can tap on (or use the dial to navigate) through the apps you have installed. 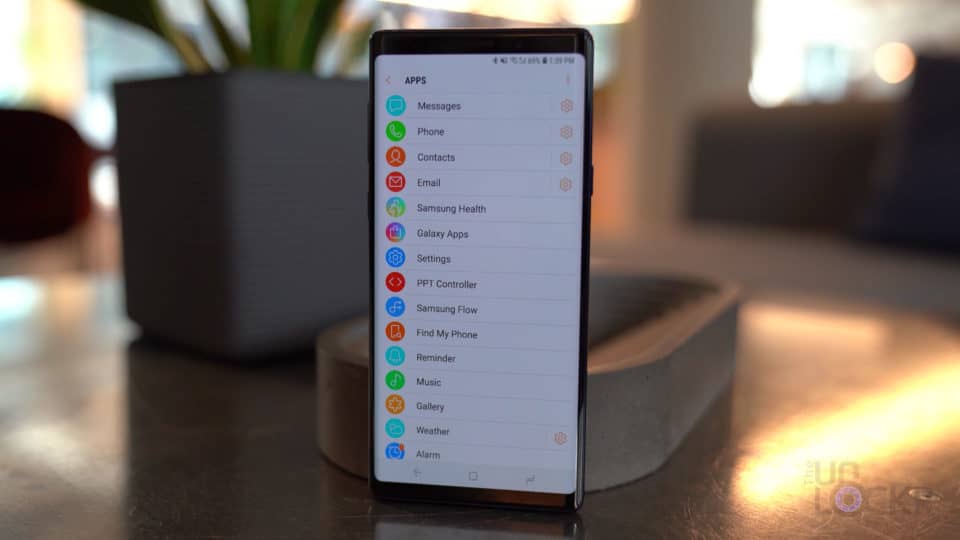 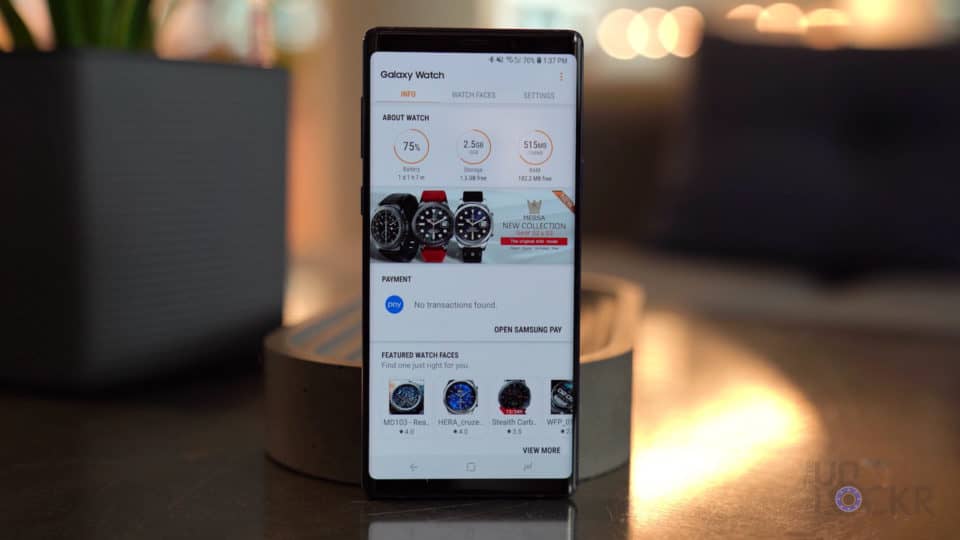 Now, finally, you can swipe down on any screen to get the quick settings menu. From here you can see your remaining battery life, connectivity, and turn on and off settings like airplane mode, battery saver, change the volume settings for ringtone, media, notifications, and system. 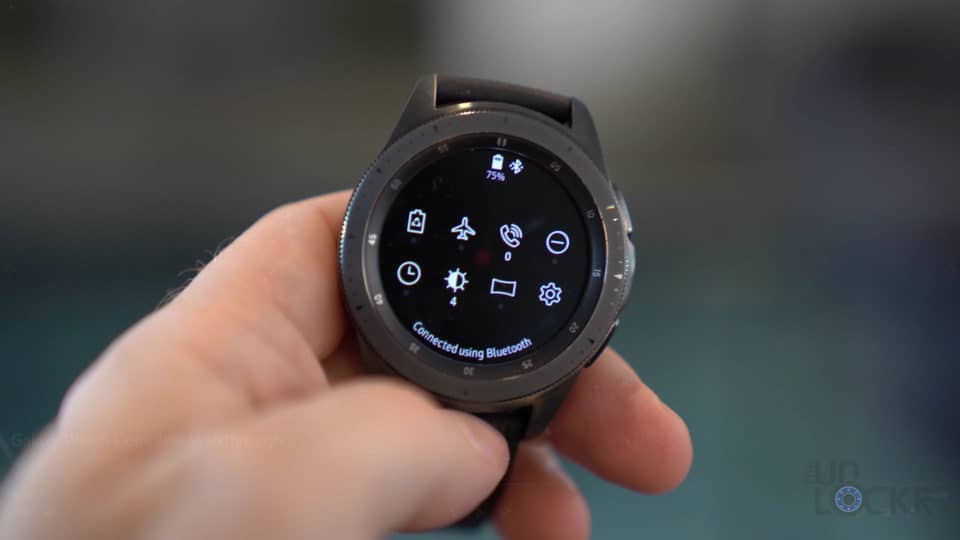 We also have toggles for the always on watch face, brightness, theater mode (which turns off the screen and turns on do not disturb basically until you push the home button to turn the device back on, useful for if you’re in a movie theater and don’t want the device lighting up), and actual do not disturb mode which just silences notifications and won’t turn on the screen for them, but you can still raiser your wrist to wake it, etc.). And finally in here, you can also tap the gear icon here to get to all the watch settings.

Really fast, let’s go through those.

And there we go, everything you could possibly want to know about the Galaxy Watch. If you made it this far, thank you (again, you guys asked for it). Don’t forget to subscribe for more tech videos and check the bell next to the word subscribe to be notified of new videos when they go live and as always, thanks for watching.

Here’s where you can check out the Galaxy Watch and get the best price on.

Let me know what you think of the watch and if you want me to go this in-depth next time.