You are here: Best Tech » Phones » Proof that Android Phones are Faster than iPhones for Data Speeds

Ever hear of a company called Ookla? I have a feeling you’ve probably used one of their services even if the name doesn’t quite ring a bell. 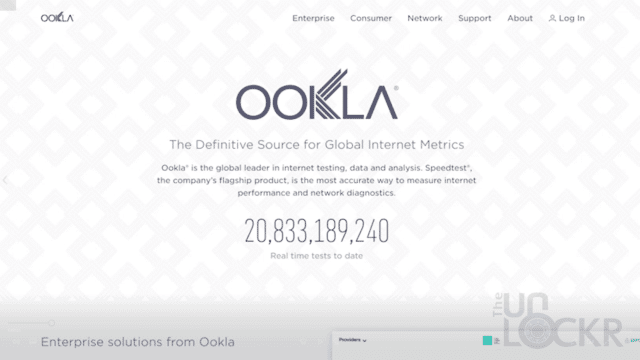 Ookla is the company behind the super popular SpeedTest.net and SpeedTest app for Android and iOS. People, myself included, use their site or app to test their internet connection. Now, because of this, and the fact that over 10 million people a day from all over the world use SpeedTest to test their connectivity, Ookla has a TON of data on devices, carriers, speeds, etc. They can even drill down into this data to specific locations, or, and here’s where this gets more interesting for our particular use case in this video, down to the chipset and OS level. 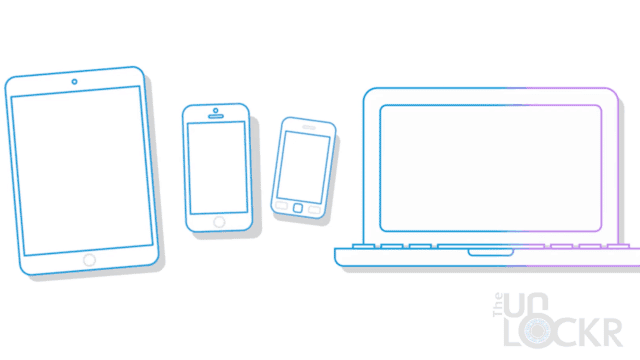 Well, it turns out that after taking over 1,000,000 user-initiated results from Ookla and their SpeedTest, devices with the Qualcomm Snapdragon 845 chipset on AT&T and T-Mobile here in the US outperformed those with Intel modems (the ones found in iPhones in particular) in every single evaluated metric. And keep in mind that Ookla, the one conducting the tests, are a third-party and a trusted one that put their own name on the results. 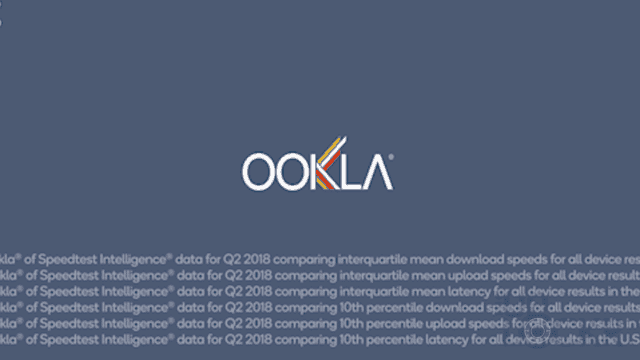 That data, by the way, worked out as follows: 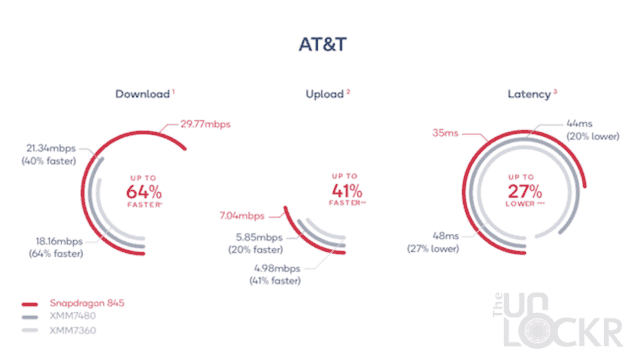 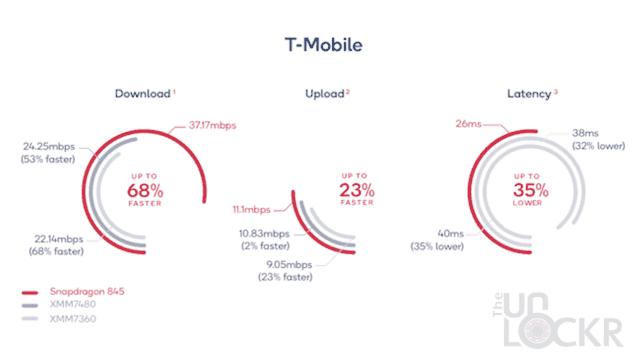 And lastly, the test results showed that not only were they better across the board, but also in areas of poor coverage, called “Worst Case Results”. 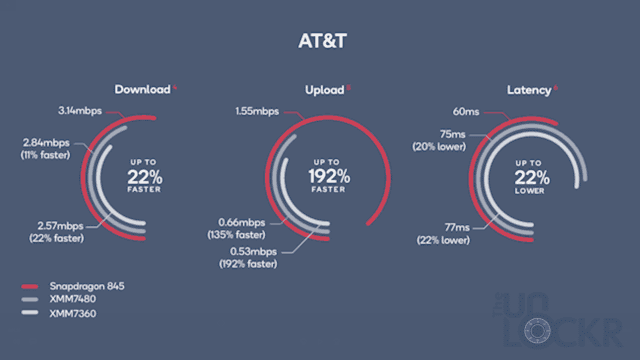 There was a 22% increase in download speed, a 22% decrease in latency and a whopping 192% increase in upload speeds for Snapdragon 845 devices over the iPhone/Intel devices on AT&T. 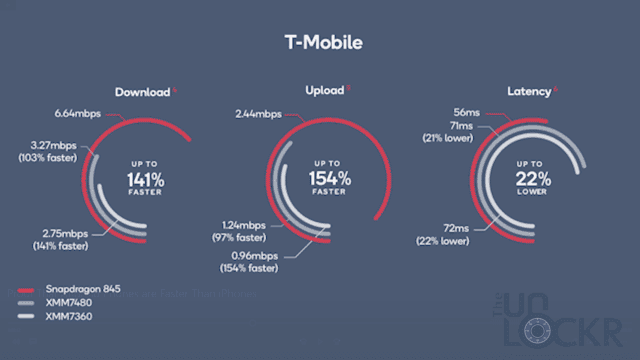 So I decided to test that out myself near my office in busy Manhattan where I knew there was a T-Mobile tower. The results were even crazier. 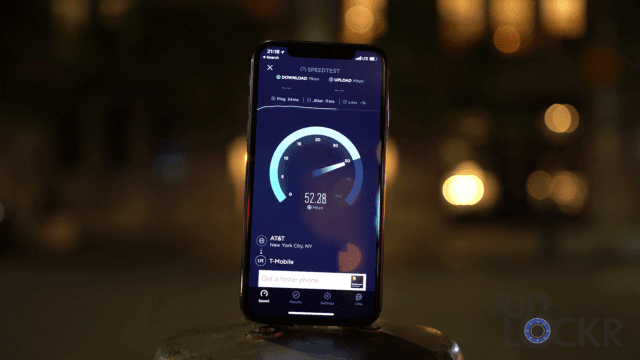 On the iPhone, I was getting about 50mbps down and only 4mbps up. 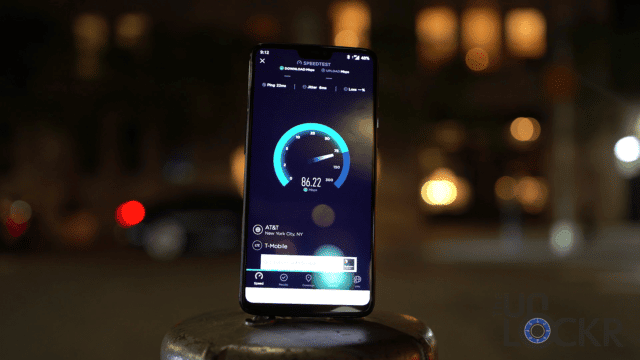 The OnePlus 6 was getting about 85mbps down, and 60mbps up. 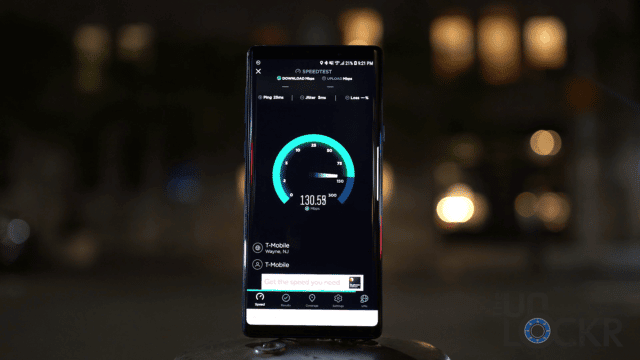 And the Note9 was getting a crazy 130mbps down and 60mbps up. That’s nuts.

Ok, so I reached out to Qualcomm to get more info on just why this is the case. From what I understand, it comes down to a few things.

Firstly, the modem on the Snapdragon 845 chipset, (called the X20 LTE modem, by the way) supports two technologies that the modems in iPhones (called the Intel XMM 7480 and 7360 in the report if you want to look them up) simply don’t have. 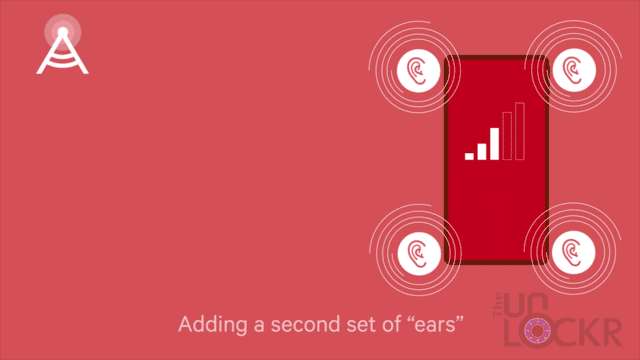 The first is called 4×4 MIMO (short for Multiple Input Multiple Output is a way of multiplying the capacity of a radio link using multiple transmit and receive antennas and while MIMO itself is used in a lot of our normal communication devices (all cellular communication as well as WiFi 802.11n and 802.11ac) the 4×4 part indicates that they are able to use 4 transmit and 4 receive antennas. These are all over the Snapdragon 845 devices and allow them to transmit and receive data easier and faster. 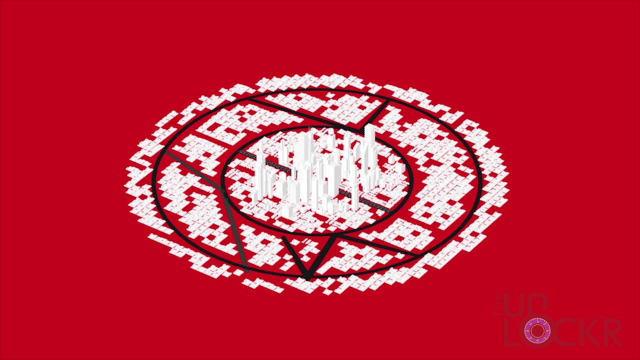 The next technology is LAA or Licensed Assisted Access. It allows the Snapdragon 845’s modem to not only use the radio spectrum that the operator (like AT&T or T-Mobile) normally use for LTE but also the 5Ghz unlicensed spectrum that’s allowed to be used by anyone. It then can combine these frequencies to create a larger pipe of bandwidth for data to travel on. Clever, right?

The other thing that, according to Qualcomm, is a big difference too, even when not using those two technologies? Experience.

These technologies I just mentioned really pertain to downloading data. For uploading data, all of the modems are using the same technology for the most part and yet, according to Ookla’s data, Qualcomm and their X20 modem still get 192% better upload speeds on AT&T in areas of poor coverage, for example.

This comes down to the signal processing algorithms in the modem. The process of the modem from being able to identify the data signal coming from a tower versus all the other noise being bounced around. It’s not easy to do, truly. Qualcomm maintains that they have “…over 30 years of doing this stuff…” “…experience matters here…” “They’re newbies by comparison.”

Check out the data here if you’re interested and let me know what you guys think of all this below!