The Razer Blade has been Razer’s top-selling product since its debut in 2015, winning countless awards because of its build quality, portability, and power. Regarded back then as the gaming laptop to beat.

In the short time that’s passed, however, Razer’s competitors have been catching up with more portable, and more powerful gaming laptops (and with smaller bezels, too) and Razer fans have been waiting for the Blade to get a refresh. And boy did it.

The new Razer Blade 15 spec sheet is impressive, for sure. Take a look:

Not too shabby, no?

Razer is also claiming that the new Blade 15 is the “world’s smallest 15.6-inch gaming laptop”. Here’s the comparison: 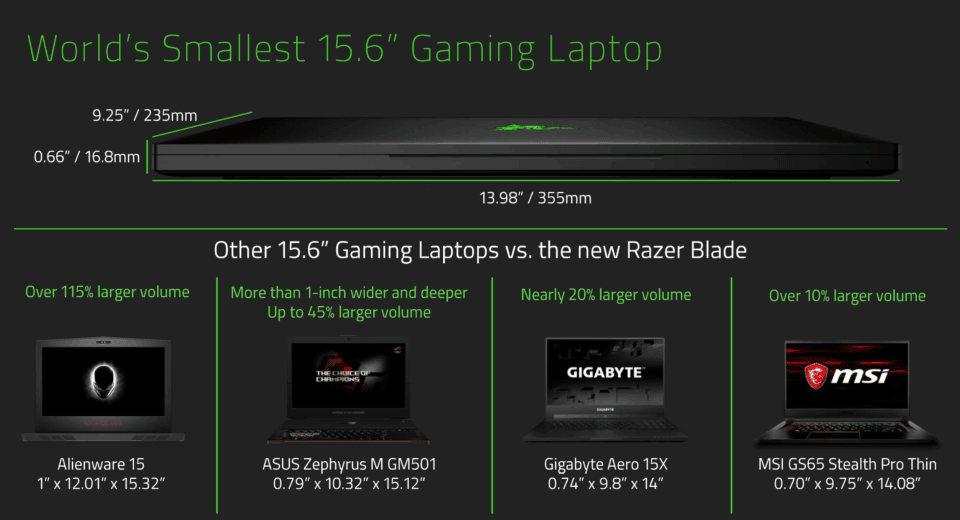 In addition to the crazy spec sheet and much smaller size, Razer did something else that I think people will appreciate: they left it user-upgradable.

This means that even though the most RAM you can get for the Blade 15 is 16GBs and the most storage is 512GBs, Razer hasn’t soldered any of that in this time around. You can easily unscrew the bottom of the laptop and put in your own third-party RAM or SSD. The Razer Blade 15 will support up to 32GBs of RAM and up to 2TBs of SSD storage. Personally, I think this is great and saves anyone who wants to go that high with the specs a bunch of money by buying and installing it on their own. Kudos, Razer.

The Razer Blade 15 will be available for purchase starting May 22nd at their online store, Razerzone.com, and at retailers in the coming weeks.

Pricing for the Razer Blade 15 will be the following for the configurations below:

*only in select markets

Besides the new Razer Blade, Razer also announced the new Razer Core X. If you aren’t familiar, the Core is Razer’s external GPU housing. You can use this to add desktop-like gaming power to your ultrabook by putting in a desktop GPU and plugging your laptop into it via Thunderbolt 3, and it’ll use the GPU as if it’s its own.

The newest model, the Core X, allows for a desktop graphics card up to 3-slots in size as well as supports the more professional NVIDIA Quadro and AMD Radeon Pro cards. It has a 600W power supply to give up to 500W to the card installed in it but also gives up to 100W of power via USB-C power delivery to also power any laptop plugged into it via the same Thunderbolt 3 USB-C cable that you’re using to access the GPU’s performance.

One other interesting bit about the Razer Core X is that not only does it work for any Windows 10 laptop with a Thunderbolt 3 port, but it’ll also support any Mac with one, as well.

The Razer Core X is aimed at solving the biggest complaint I’ve heard about the Razer Cores from readers: the price.

The Razer Core X price is just $299. They were able to do this by removing the ethernet port, Chroma coloring, and making it out of aluminum instead of the CNC machined Core v2. In turn, making it much more competitive with other eGPU’s on the market for anyone just interested in the extra performance.

The Razer Core X, like the Razer Blade 15, is available for order starting today from razerstore.com

Here is the full press release for the Razer Blade 15 and the Razer Core X if you feel like reading them.

Otherwise, as soon as I can get the Blade 15 and Core X, expect complete walkthroughs on both on the channel.

In the meantime, what do you guys think?