A giant box showed up today from Sony and I think I know what it is. This is the new Sony A8F, their flagship 4K HDR OLED TV, the successor to their much-praised A1E from last year that first touted the innovative Sony Acoustic Surface technology (which we’ll discuss more in a sec).

Now, to call it the successor to the A1 is technically true but a lot of the TV has actually remained the same as far as the performance and underlying tech. There are however two big changes that make it better for a lot of people though.

Cheapest I could find the Sony A8F for online if you’re interested.

First though, let’s start with that similar tech.

The TV has a 4K resolution and supports HDR content. If you’re not familiar, HDR is high dynamic range and means more shades of colors, deeper blacks, and brighter whites as well as more colors to display. Think of it as the color upgrade to content where 4K was the resolution upgrade over 1080P. 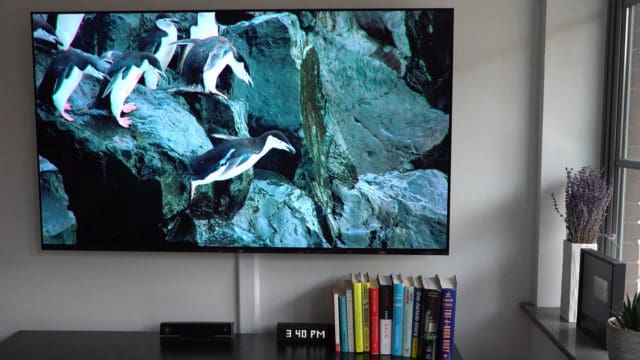 It even supports upscaling to 4K HDR thanks to the X1 Xtreme Sony processor (same from the A1E) that is a serious powerhouse frankly. So this means that all of your non-4K, non-HDR content gets a boost as the processor analyzes each frame of each image, and even can recognize objects within a scene and adjust them separately, to sharpen and boost colors. 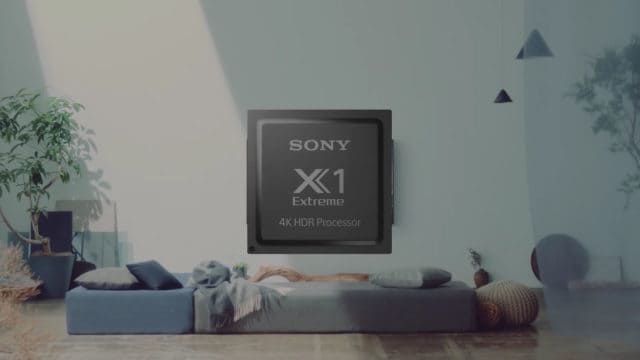 Here’s an example of what I mean. Here’s it on two separate 4K TVs. 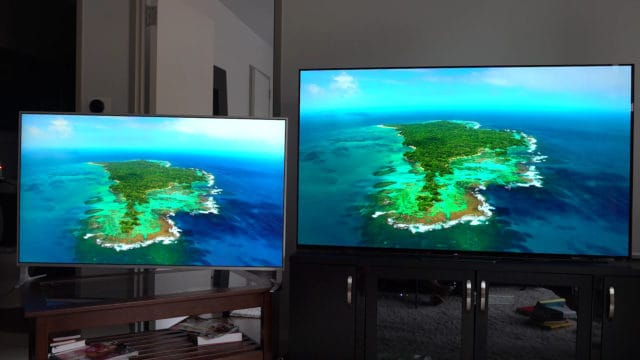 The blacks are super dark to me, as they probably should be on an OLED, but the TV isn’t the brightest on the market at just 700 nits.

The other piece of tech that I personally am infatuated with is this screen is the Acoustic Surface tech that, again, was in the A1E. The TV has actuators behind the OLED panel that can actually vibrate the screen turning it into a giant speaker. It can even change where the sound comes from on the screen depending on the content. So the punch sound can come from where the character is at the right of the screen vs the waterfall in the background on the left, etc. 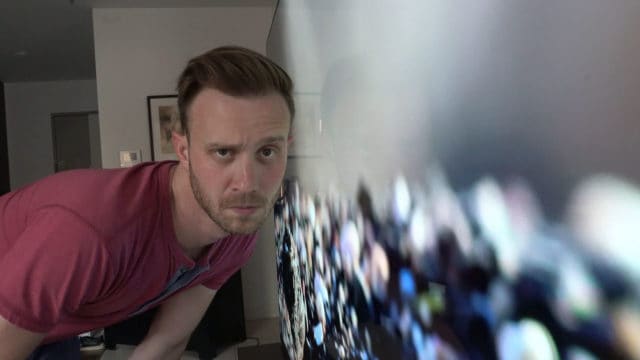 Now, of course, I tried really hard to see if the screen would actually make any noticeable vibrations just to check, but since it is only used for the high and mid-tones it’s vibrating so fast that you can’t see it move. The lower, slower sounds come from separate woofers also behind the screen.

The TV has three USB ports and four HDMI ports that all support HDMI 2.0 and HDCP 2.2, but it’s worth noting that only HDMI inputs 2 and 3 support 4K at 60fps (so that’s where you need to plug in your Xbox or PlayStation). 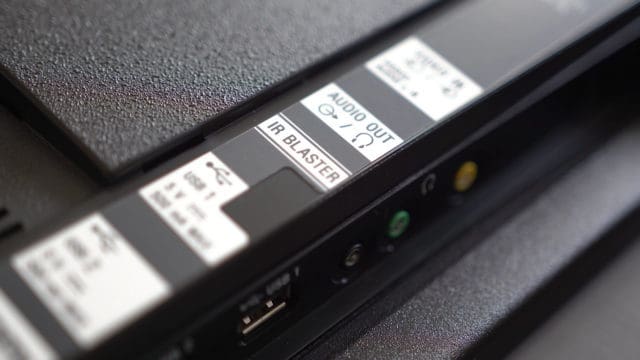 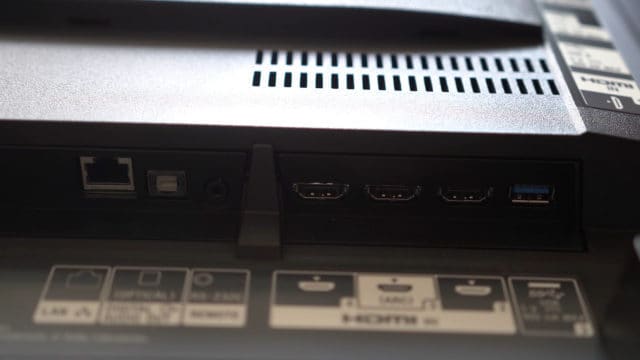 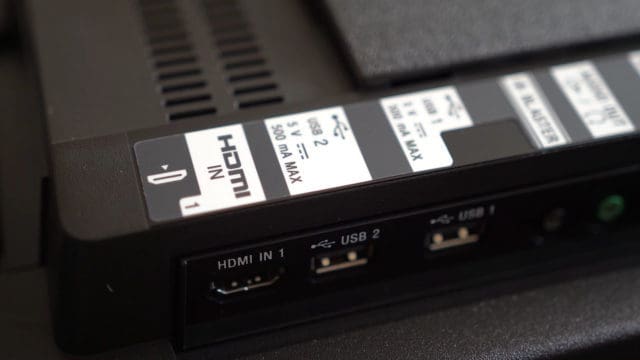 The TV is running Android TV as the OS which I don’t mind but agree isn’t the most intuitive OS, as well as has some noticeable lag once in a while which is annoying, but Sony has promised a complete revamp of the Android TV UI coming in an update soon so maybe that’ll help. 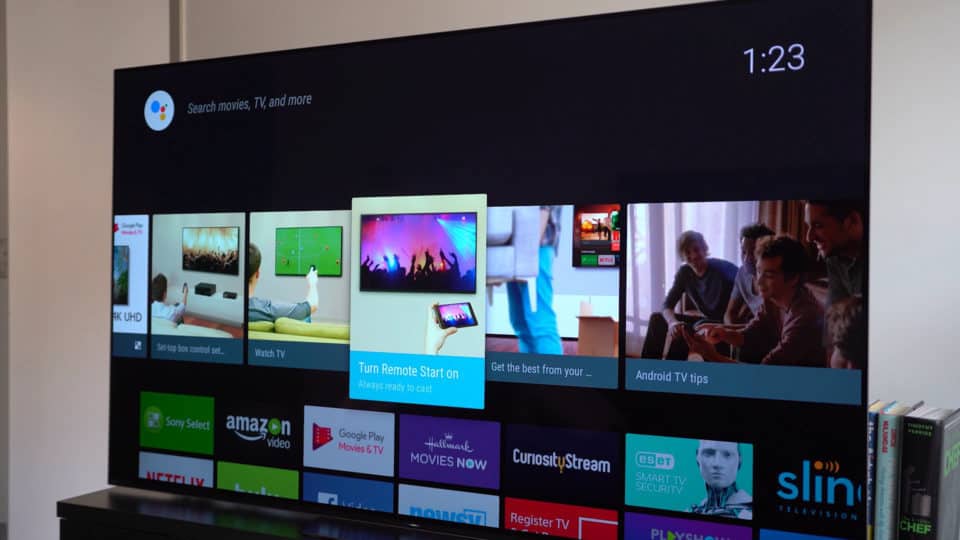 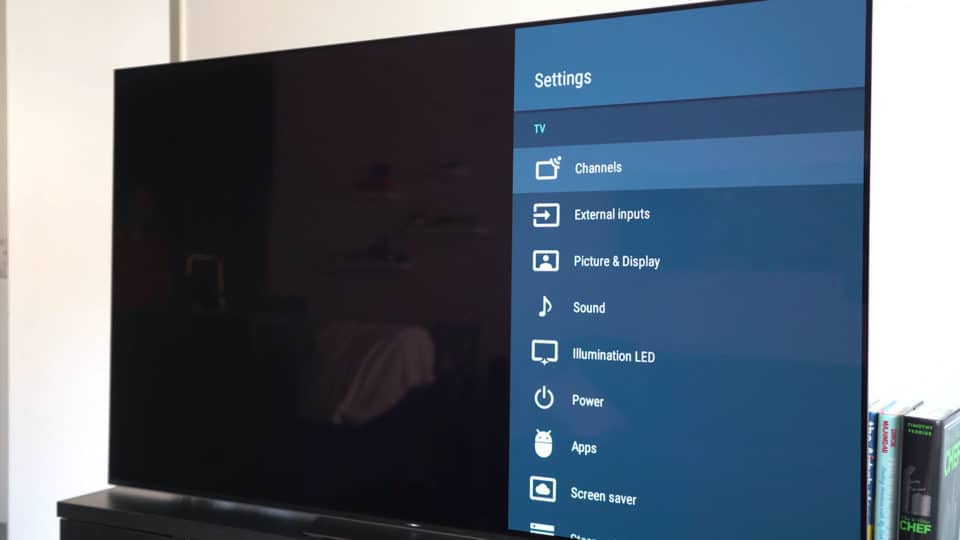 One thing I do like about Android TV though is the integration with Google Assistant and Chromecast, the setup process, and the fact you can use Alexa or Google Home to turn it on, change channels, and just generally control the TV however you want. 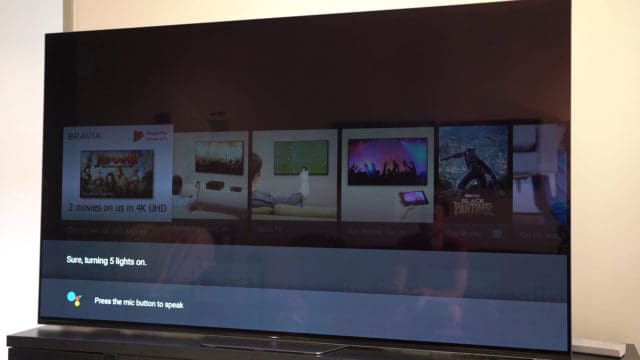 Now, for something that has changed on this TV from the A1E, it no longer is held up by a giant leg in the back. This easel-looking configuration was unique in my opinion, but the new more standard looking mount means a much smaller footprint needed for putting it on a media console and makes it sit much more flush against the wall when mounted up. So less “cool” maybe but more functional for most people, I’m sure. 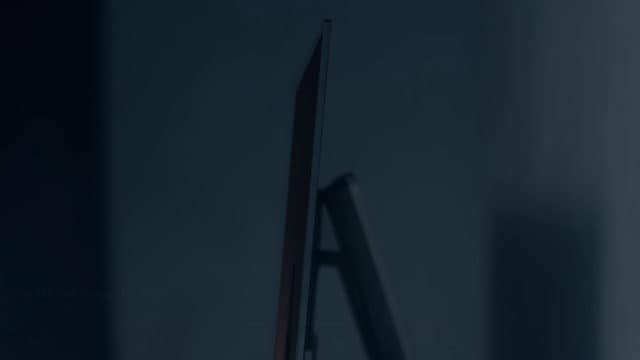 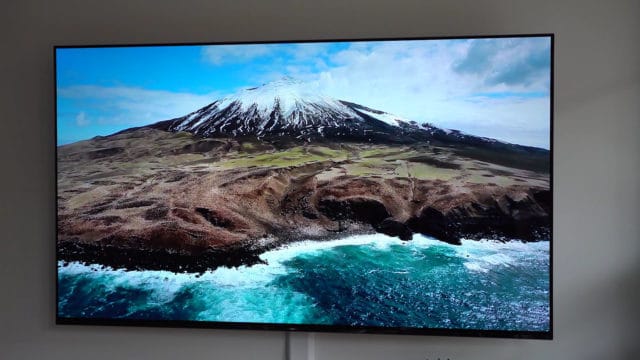 Also, in the base, we have covers and channels to route your cables so they’re not all over the place. Good for that minimalistic look, of course. 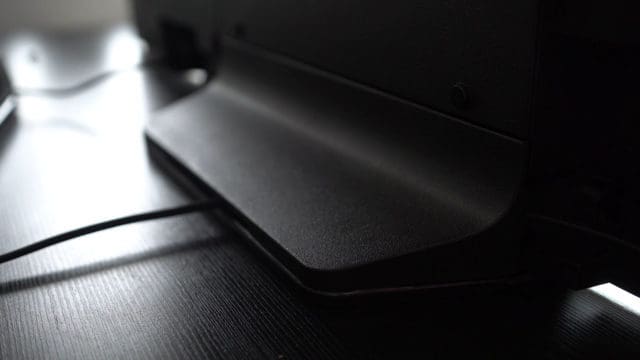 The remote is a big complaint from a lot of people because, well, it’s the same remote you get with their lower end TVs even. And next to the much more refined ones of Samsung and LG, it definitely looks old. It does have a crap ton of buttons though and has the ability to use IR blasting so you can program it to your other devices like your cable box, speaker system, etc. if you want. 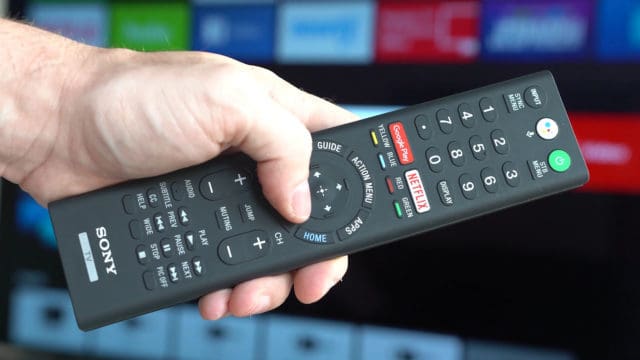 Finally, the last big change for the Sony A8F this year, and it is a big one, is the price. It is $1000 cheaper than last year for the 55″ and $1500 cheaper for the 65″. And compared to other high-end OLEDs out there by other manufacturers, it’s a decent chunk cheaper for similar features, as well.

Cheapest I could find the Sony A8F for online if you’re interested.